Blessed are the wagers of just war? 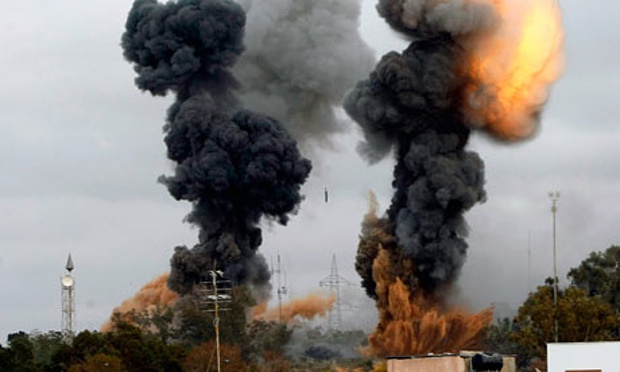 As the first US bombs began dropping in Libya, I received an invitation to attend the Huffington (as in, infamous Arianna’s ex) Ecumenical Institute’s symposium on war and peace. The invitation read: “In a world racked with war and violence, what do the Orthodox Christian and Catholic traditions have to say about war and peace? How can we work together to create a more peaceful and just world?”

Held at Loyola Marymount University in Los Angeles, California, the first tip-off that status quo and contradictions were the more likely agenda might have been when I arrived to see the university’s US air force reserve officers’ training corps performing drills on the front lawn. The second tip-off might have been the panel itself, which was masculine-heavy but for one Dr Laurie Johnston.

Nonetheless, I attended the two-day programme hopeful to learn the Orthodox Christian and Catholic response to war and how these groups devise working together as peacemakers. Sadly, the conference never delivered. Instead it offered a compilation of academic papers that reiterated the firmly established historical framework for “just war theology.” Dr George Demacopoulos, for example, prattled away ad nauseam on the tenets of St Ambrose (339-397), one of the original “doctors of the church” who set forth the principles of “active Christian love” (ie “defence policy”) that later developed into just war church policy.

Avowing equal faithfulness to the Prince of Peace, neither the Orthodox Christian nor Catholic panel speakers spoke much about Jesus, much less about actual peacemaking. It seemed, simply, not to come up. Officially, Orthodoxy emphasises anti-war policies; yet Orthodox Christian nations continue to raise armies and Orthodox Christians in America continue to send their daughters and sons off to war. Catholics, we’re told, have rules of engagement. That said, I rhetorically ask, what’s the final analysis? In any case, none of this is particularly Christian.

Furthermore, it seems an extraordinary contradiction to claim to be Christian and a justifier of war simultaneously.

I’m no Bible scholar, but I’m pretty sure that Jesus never advocated or rationalised war. Worth noting is that the first 300 or so years of the church were dovish, more closely adherent to the teachings of Christ. Approximately from Constantine forward, the church gets political. In other words, Christ’s message of forgiveness, peace and love has been tweaked to fit the aims of state. Particularly in relationship to war, what today passes off as Christianity is a mere skeleton of Christ’s instruction.

Among this gathering of Christians where there was little actual talk of Jesus, Dr John Fotopoulos eventually did speak on Christ. However, he was quick to contextualise the Jesus of Nazareth who lived among peasantry versus the capitalistic, imperialistic landscape upon which we now live. Fotopoulos reminded his audience that he is not an ethicist, implying perhaps that he is not able to provide moral guidance or prescriptive measures for making peace not war.

Johnston, our token woman, scratched the surface of peace-building with choice reference to decades-old examples of the international humanitarian work of Catholic Relief Services; and that was at the closing of her talk. Dr Andrew Walsh’s presentation mentioned the velvet revolution as an example of successful nonviolent revolution. Both professors Johnston and Walsh cited fine examples of nonviolence and post-war relief, but what about similar contemporary measures? What about the revolutions sweeping north Africa today?

I’m still trying to figure out how this collection of professors and their respective theses had anything to do with the posited debate. Disappointingly, these 11 representatives of academia seemed bent on upholding the stodgy old guard that offers little accessibility onto the path of peace.

In the US – the nation that perpetually arms the state of Israel to the demise of untold Palestinians, that wages offensives in Afghanistan and Iraq, and sanctions profiling and torture of its own citizens – there is a massive assembly of flag-wagging, war-advocating citizens who somehow justify their behaviour through a warped interpretation of Christianity. And now the US administration intervenes in Libya under the pretence of protecting “American (and so-called Christian) values”.

Indeed, “Christian values” is but a campaign slogan, and a thin guise for the military-industrial complex and American investments in oil abroad.

Jesus said: “Blessed are the peacemakers,” actively urging humanity to stop war. Huffington Ecumenical Institute’s acting director, Father Dorian Llywelyn, SJ, said: “Now more than ever, the world needs Christians to speak out about war and peace with one, clear voice, and to work with all people of good will to build that peace which is the fruit of justice.” Noble beatitudes and platitudes abound; and nowhere in the two days of lecture did anyone come close to the real matters at hand. A patent, united Orthodox Christian and Catholic voice that transmutes theory to practice is either squelched by the dictates of political correctness, or absent altogether. By the symposium’s end, the problems of war and peace loom as large as ever, giving pause for reflection on the useless nature of hot air.

This article first appeared on on The Guardian