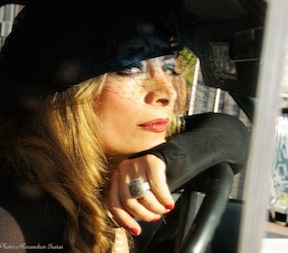 A glimpse into her odyssey from Greek-Cypriot émigré to musical emissary in Hollywood.

Touted as one of Greece’s national treasures, Alexia is regarded as a gem internationally, too. Soulful and versatile singer, songwriter, performer, musician with a series of gold and platinum records to her credit, not the least of which was her debut that sold almost 200,000 copies, Alexia possesses a voice and style that is unforgettably singular.  Striking beauty and inordinate talent—these qualities are surpassed only by the warmth and strength of her spirit.

Recently the singer made Los Angeles her home to take part in what she describes as an environment “that encourages unconventional or avant-garde ways of making music.”

Originally from Famagusta, Cyprus, Alexia’s childhood was interrupted when her homeland fell under siege.  The 1974 Turkish invasion and subsequent occupation of the land of her birth rendered refugees of her, her entire family, and countless other Cypriot Greeks.  For some, such circumstances would be embittering, soul-crushing, and defeating.  For Alexia, the subjugation and displacement seems only to have fueled the dreams that grew into her life’s work.

Speaking about her experiences as a displaced person in relation to its effect on her music and art,  “Firstly, because of the displacement and because I have a protective family, I learned survival skills.  Secondly, I took a creative writing class in Athens that had a profoundly healing effect on me.  Through writing I was able to observe the ways in which I’d been recreating displacement in life.  I experienced displacement in a variety of ways; I was even displaced from myself and my own voice.  Ever since becoming aware of it, I’ve been honoring it and using it not in destructive ways, but instructive ways.  Through writing I was able to salvage myself, and consciously incorporate feelings from my experiences into my art.”

What inspires you, especially during life’s more challenging times?

“Again, I go back to that creative writing class, and the influence of literature as well.  Through writing I’ve developed a way to transform memories and experiences into wisdom.  I’ve become whole through writing, and am grateful to the healing that has evolved from it.  My hope is that as I heal myself and present myself as a whole person—rather than displaced or fractured—this is channeled into my music, which in turn may be healing for others.”

You express your art in a variety of ways including music, of course, but also through painting and film, for example.  Your work cuts across artistic genres and cultural boundaries.  How do you describe your style?

“I am influenced by the music I listen to, and by artistic movements such as Dada.  My work has a confessional intent, it has theatrical elements.  Eclectic or collage may be the best way to describe it.”

Do you always write your own music and lyrics?

“I love to collaborate as much as to write for myself.  Collaboration with other composers is very important to me.  The jazz album “Birds have to Fly” is one of my latest collaborative projects with Peter Massink” (for which Alexia has written the lyrics, and Massink has orchestrated and played horn).

Would you speak a bit about your creative process?

“It is something that comes through me, rather than by me.  The music and lyrics happen simultaneously and with few edits, which is different from the way it happened when I first began composing.  Then it was more formulaic, music first then lyrics, or vice-versa.  Oftentimes my creativity is sparked by pain—whether it’s something hurtful in my own life or something hurtful happening out in the world.  At one stage, I befriended a woman activist who introduced me to amazing women artists, and helped open my world to feminism.  All of this inspires my process.

In 2007 I recorded “Voice Alone,” sound without known structure, improvisation.  This helped me to find my new voice, to deconstruct of what I know song to be, and then reconstruct it with myself.  This process is the path of the soul, and I go with the flow.”

How much does your Greek heritage influence your identity, music, and worldview?

“Recently someone commented to me, “You carry your Greekness whereas many leave their culture behind.”  I received this as a compliment of highest regard.  My foundation is Cyprus and Greece.  Greek is my language, it is my art and soul.  I am happy to show it, and to let it guide me.  And I hope that I am able to present a favorable impression of my heritage.  I find that being Greek in the world abroad helps me to understand, appreciate and better communicate with other cultures.”

Historically, the arts provide a pathway onto common ground.  Music and art are unifying, and able to create connections in places where it might not otherwise be possible.  I compare Alexia’s work to that of another international singer/songwriter, Natacha Atlas who’s been deemed an Ambassador of Goodwill by the U.N.  Atlas uses her music as a means to “build bridges” over cultural, ethnic, national and religious divides.  In this way, Alexia’s work is not unlike Atlas’ in that it speaks a universal language and straight to the heart.

Alexia’s latest album (December 2010), “Re-Be” is a revelatory odyssey back to self in which she returns to “the puzzle, that I had left half-done, un-done, that summer’s day on our veranda in Famagusta as the radio announced that we had just had a Coup d’etat to be followed by a Turkish invasion, was being completed piece by piece by piece… And I was the one placing each piece.  Piecing every piece together.  Finally with this meticulous placement, my displacement had found its home too, so did my own placement in the scheme of things, in life… What a joyous occurrence!”

Briefly discussing her return to the States by way of Los Angeles, AKA The Creative Capital of the World, “I’ve been blessed to receive support everywhere I’ve gone; and, perhaps, in Greece the support came more quickly, for which I am eternally grateful.  I studied at Berklee College of Music (Boston), and then spent time in New York before going to Greece in 1988.  I dreamed of returning to America because of the philosophy in music and art.  There is an air of openness that encourages unconventional or avant-garde ways of making music.”

Reflecting on Alexia’s journey—professional and personal—Maria Callas comes to mind.  The diva of mythical proportions, predecessor to Alexia, if you will, also found sanctuary and success in Greece.  Alexia occupies a space in the legacy and presence of virtuosity—in Greece, Cyprus and around the globe.

For a virtual experience of Alexia, explore AlexiaMusic.com.  You’re in for a treat!