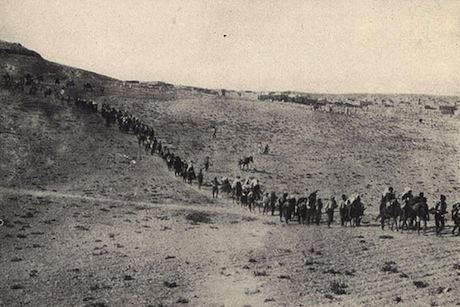 Greece is a microcosm of the world, complete with money problems and refugees. The EU should be doing more to aid those rendered most vulnerable by the crisis.

Being of Armenian descent, I was born into the history of Asia Minor, an exotic sounding nomenclature used by my grandfather’s generation when speaking of their homeland. Asia Minor was used interchangeably with Anatolia, and Smyrna (Izmir).

Exact numbers vary, but prior to WWI and the Turkification of the region, Asia Minor had for thousands of years been home to several million Greeks, several million Armenians, and other non-Turkish ethnic groups. A series of ill-fated events have marked this time in history as the “Asia Minor Disaster”. Beginning in the late nineteenth century, culminating with the end of the Greek-Turkish War and the burning of Smyrna in 1922, Greeks, Armenians, and other minority Christians indigenous to the region were all but expunged. A compulsory population exchange brokered by WWI Allies removed the remaining Greek Orthodox Christians of Anatolia to Greece. In exchange, the Turkish-Muslim population that had been in Greece was moved to Turkey.

At this time Greece was in financial straights. Exhausted by wars, debt bondage, the Depression, and oppressive unemployment, approximately 1.3 million Greek refugees were added to Greece’s demoralized population. And then Greece defaulted on its national debt. Sound familiar?

To remedy the situation, the League of Nations offered Greece loans, the conditions of which included severe austerity measures. Greece declined. It decided instead to float the drachma. A debt moratorium was imposed and spending on infrastructure increased. Greece renegotiated terms with creditors, and by 1934, industrial and agricultural production was growing, the drachma was stabilizing, employment was increasing, exports were becoming more competitive, and ultimately, Greece bounced back. In very basic terms, this is how Greece recovered last century – refugees notwithstanding.

Some rights reserved.Since the Greek majority voted OXI/NO, one wonders if a 1930s-styled recovery might have been plausible. If Greece had control of its currency, devaluing it once again might help to break out from the dark cloud of deflation and depression. At this moment though, capitulations aside, that’s neither here nor there; and refugees continue to pour into Greece. What we have, as in the last century, is another crisis within a crisis of epic proportions.

Set on a stage similar to post WWI, another version of Middle Eastern theatre is playing out. Driven by geopolitics, raging wars and crimes against humanity (and arguably, neoliberal economic policies), refugees are once again crossing the Aegean in droves. Though the battlefields have changed, the well-established route from Turkey to Greece makes the eastern Mediterranean the prime passageway into the EU.

A group of migrants walk on the last leg of their crossing from Greece. Stephen Ryan/Flickr. Some rights reserved.In last century’s exodus, the Greeks and Armenians (my forebears included) who sought refuge in the Aegean islands and Hellenic mainland at least shared linguistic, ethnic, and religious sameness. The relocation, while forced, made some degree of sense, as Greece held the promise of a motherland. Similarly, contemporary Syrians of Armenian heritage, for example, have the right of return to Armenia proper. Though Armenia has little in common with Syria, Syrian-Armenians have a place to go.

This is not the case for the majority of Syrians, with differences of ethnicity, language, and religion. And so, for these twenty-first century refugees, any idea of ‘homecoming’, of being re-joined with a motherland, is non-existent. That said, Greece has long been a transit country, and most refugees and migrants arriving on Greek shores have other destinations in mind. Their hope of starting fresh lies in other parts of Europe, which points to a shared responsibility of the EU in assisting Greece with its daily inpouring of refugees. However, amid the economic crisis, the refugee crisis seems – to some extent and albeit inconceivably so – minor.

Since the 1990s, Greece has been treated as a resettlement country where documented asylum-seekers would eventually be relocated to the European countries to the north. Up to now, Greece has lacked sufficient governance, personnel and resources to handle its inordinate number of asylum-seekers. The responsibility is instead falling to a handful of relief NGOs and individual Greek citizens, which simultaneously accentuates the much-needed cooperation and assistance from the EU and UN and the organizations’ irresolution thereof.

A boy from Iraq stands with his family at the gate of the registration centre in Kos. Stephen Ryan/Flickr. Some rights reserved.

Indeed, the International Rescue Committee, an NGO that assists refugees of conflict in the world’s poorest regions, has recently sent an emergency team to Lesvos where thousands of refugees continue to pour in. The EU’s inability to support Greece means that the IRC has to send staff not just to the poorest regions of the world, but to the richest, which, according to the IRC, is a sad commentary on the EU’s response in Greece.

According to the European Commission’s Migration and Home Affairs’ Refugee Fund web page: “the number of [asylum-seeking] applicants is not equally distributed among EU countries. Some countries face larger strains on their reception capacities and asylum systems due to the disproportionally large influxes of asylum-seekers into their territories. European solidarity with these EU countries is ensured through practical cooperation, harmonisation of legislation and the European Refugee Fund.”

Further assurance of help is declared on The Asylum, Migration and Integration Fund Web page. “EU States most affected by migration and asylum flows can count on solidarity from other EU States.”

‘Solidarity’ – this word is repeated ad nauseum with regards to the EU’s commitment to rescuing Greece from economic collapse, as well as to its commitment to helping its border nations with refugees.

Somewhat in contrast to the promises of cooperation, solidarity, and preservation is the EU’s Dublin Regulation, which puts the responsibility of processing migrants upon the first country of arrival. In fact, refugees and migrants rely on the Dublin Regulation to gain quick asylum. This makes the already vulnerable border nations even more weighted with a responsibility that is otherwise purported to be shared.

In a report issued on 1 July 2015 by the UNHCR, EU solidarity is reiterated, as Greece’s inadequate reception and aid facilities are cited as in serious need of support. The report concludes that imbalances are occurring as Greece and Italy continue to receive the bulk of seaborne refugees, and furthermore, the situation is unsustainable. The needs are spelled out, yet actual, remedial action on the ground is slow in coming. There seems to be a discrepancy between the high humanitarian ideals espoused in theory by the EU and UN and its practice. Championing the rights of refugees and migrants appeals to a collective benevolent sensibility, but EU members, we’re told, are as yet undecided on how to respond.

When I was kid, my grandfather often quoted lines from his favourite William Saroyan short story entitled “An Armenian and an Armenian” (1935). The last line especially sums up my grandfather’s explanation as to how they, twentieth century refugees of Asia Minor, recovered in the last century. “For when two [Armenians] meet anywhere in the world, see if they will not create a New Armenia.”

While there’s much to be said for the fortitude of the human spirit, particularly when two or more come together, at the time of last century’s Asia Minor catastrophe, their recovery also occurred via intercessions of the international community. It was the media that helped capture international attention. Hundreds of dispatches were published in the New York Times, the Christian Science Monitor, and the Los Angeles Times, from the late 1890s through to 1923. Media coverage of Asia Minor was invaluable for providing proof of the disasters. After WWI, public interest in the twentieth century Asia Minor disaster waned. That fact, however, doesn’t detract from the media’s purpose to inform and empower citizens to make appropriate decisions.

“Just Do It”. Anton Krieger/Flickr. Some rights reserved.

It’s said that ‘as goes Greece, so goes the world’. The adage asserts that nothing happens in isolation, that Greece, replete with refugees and money problems, is a microcosm of what’s happening worldwide. Migration, whatever the reason, is part of a larger context, one that’s intractably intertwined with the world at large. In the case of Greece, those washing up on her shores are not migrants, but refugees running for their lives.

“The EU’s response to the overall crisis in Greece should include consideration both for Greece’s outsized share of responsibility for asylum seekers, and for the rights and well-being of the asylum seekers themselves… While everyone is feeling the effects of the economic crisis in Greece, those on the margins, like migrants and asylum seekers, are particularly vulnerable. The EU can and should do more to help these often-forgotten victims”, says Human Rights Watch’s Eva Cossé.

I concede to the fact that I write this post from a North American granted vantage position. Nevertheless, as an indirect heir to the first Asia Minor disaster, ethnic and sentimental ties aside, I write to to record the repetitiousness of history, and moreover, to hold the EU and UN to its commitments to Greece, Italy, and Spain and to the other point-of-entry nations struggling to assist refugees. Another Asia Minor disaster is well under way and there isn’t time for further deliberations. How much longer must today’s Asia Minor refugees wait for recourse? Nike, the Greek mythological goddess of victory, was born in Asia Minor. In her American parlance, speaking to the EU and UN to make good on their promises: “Just do it”.

This article first appeared on OpenDemocracy