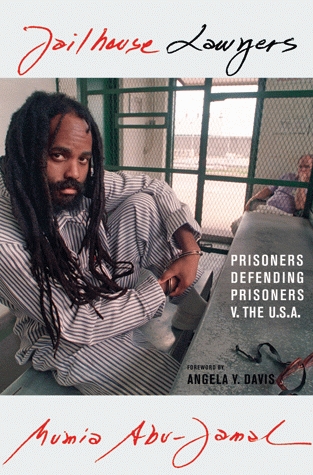 To borrow from an old African-American proverb, Mumia Abu-Jamal “speaks truth to power” in his latest book on jailhouse lawyering, the American legal system, and the prison-industrial complex.

Abu-Jamal has been imprisoned for over two decades in a Pennsylvania correctional facility—the institution famous for employing Charles Graner, the prison guard and Army reservist convicted of prisoner abuse in the Abu Ghraib prison in Iraq. The prison employs a staff that’s 95 percent Caucasian to oversee the 98 percent African-American inmate population and is notorious as an environment fraught with institutionalized racism and abuse.

The reader might expect text that was produced in such a volatile environment to translate into defensive, derogatory, or perhaps censored reading material. On the contrary, Abu-Jamal writes with incisive equanimity while presenting penetratingly disturbing facts, little known in mainstream society.

Jailhouse lawyers work for free, at an acute disadvantage, and with persistent exposure to prison-issued retaliation. More often than not, they are consigned to solitary confinement for pursuing this work. In prison, unity is feared. Hence, isolation is punishment. The author points out that, despite these obstacles, the jailhouse lawyer is among the rare few to actually affect positive and far-reaching prison reform, as well as reversals of convictions. Abu-Jamal defies an adage popularized in the lawyer industry that “one who acts as his own lawyer has a fool for a client.” Surprisingly, these “fools” often emerge victorious.

At its core, jailhouse lawyering—necessitated by the inequality in America’s legal and prison systems—is part of a class and social struggle, and a human rights movement. With the giant increase in America’s prison population since the 1970s, Abu-Jamal looks at the political rhetoric on the various “wars” within our culture. The so-called “war on drugs” is one example of a campaign waged, not to rehabilitate people hooked on drugs, but to grant more state power to incarcerate. His examination gives rise to questions as to whether the real war might be on our nation’s own citizenry, in particular, its minorities. Statistics show that the number of incarcerated women has grown 300 percent (as compared to men at about 200 percent), and in overall prison demographics, African Americans eclipse all other racial and ethnic groups.

As an aside, the privatization of the American prison system, or the prison-industrial complex, is big business. With prisons as a cog in the wheel of the free market economy, it then stands to reason that the demand for prisoners necessarily increases. Presently, one in 100 Americans is imprisoned. Furthermore, American prisons have been likened to labor camps—a high volume prison population translates into cheap labor.

Journalist and author Eric Schlosser (Fast Food Nation) is noted for his assertions that the prison-industrial complex is a set of interest groups and institutions, as well as a mindset. He sees the seduction of big money as a corrupting factor in the nation’s criminal justice system. The prison-industrial complex is not about rehabilitation, it’s about profits. For this system to survive, it banks on an inordinately high failure rate among the prison population. The more packed the prisons are, the more the system profits. Inside this system, prisoners like Abu-Jamal who dare speak up for their rights, who dare hold abusers and corrupters accountable by taking legal action, are those who live in danger of being thrown in “the hole,” threatened with torture and even death. This reiterates the point of the conditions under which Jailhouse Lawyers was written, and helps the reader grasp the author’s conviction that jailhouse lawyering warrants public attention.

Jailhouse Lawyers goes on to dissect the intent of the law, describing the views of Rousseau, Marx, and Darrow, all of whom generally agree that the will of the upper class converts into law for the commoners. Abu-Jamal makes a convincing case that the law is regularly dictated by the wealthy and replicates class stratification and tyranny. He references American lawyer Clarence Darrow (1857-1938) who, in 1902, explained that the rich make the laws and that those very laws are not necessarily there to protect. Courts, then, are not instruments of justice. What matters most is not one’s innocence or guilt, but whether or not one has a savvy lawyer at their defense.

Paraphrasing Howard Zinn in Declarations of Independence, a judge is more like a dictator and the courtroom a dictatorship. One enters the courtroom anticipating a “bastion of democracy,” but finds that the judge dictates the use of evidence, witnesses, questions, and interpretation of law. And, Abu-Jamal adds, the meting out of punishment. To put it another way, when a prisoner does get to trial, it’s a crapshoot. In these circumstances a person’s destiny is random, designated by the luck of the draw of judges. Abu-Jamal points out that the Prison Reform Act only serves to reinforce the assumed faultlessness of the state. Jailhouse lawyers must pander to this flawed system nonetheless. Not having the street lawyers’ luxuries of wheeling and dealing, jailhouse lawyers must approach the system as though it operates justly.

Abu-Jamal points out that sometimes the hired or appointed street lawyers have little interest in working on their clients’ behalf. With the class, ethnic, and racial differences that surface in the legal system, it’s crucial to have a lawyer who’s sworn to defend the rights of their client. In the case of the jailhouse lawyer, the client is already a prisoner, one who’s often on death row. Motivated not by money, jailhouse lawyers work as though their life depends on it—which it usually does. In addition, jailhouse lawyers frequently demonstrate a greater competency than their street counterparts, especially as the street lawyers are driven by dollars. But, the author rhetorically asks, who can blame them with the exorbitant student loans they bear from law school?

Abu-Jamal stresses that being a non-white prisoner (or non-white citizen for that matter) is disadvantageous. American law, his book asserts, even after the civil rights movement, is laced with Dred Scott-esque white supremacy. He sources the 1857 Dred Scott v. Sanford case in which Scott argued for his wife’s and his own freedom. The verdict said that no person of African ancestry could claim citizenship in the United States and, furthermore, that Scott was not entitled to bring suit in federal court. Abu-Jamal reiterates that the rights of the American people remain heaviest within the affluent domain.

Poet, writer, and activist Audre Lorde has said that silences will not protect us, but will only hurt us. Deadly silence is what propels the jailhouse lawyer. Unbeknownst to most of us, jailhouse lawyers are a task force for reform. Reform, however, first requires identification of the problem, followed by education and action that jeopardizes the status quo. Jailhouse lawyers inspire a sense of hope for their clients themselves and, perhaps, for oppressed people everywhere.