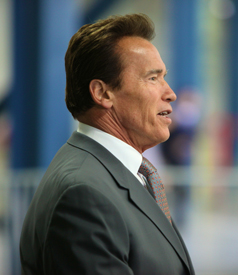 Los Angeles, California – Setting the precedent for the rest of the nation and the world, Gov. Arnold Schwarzenegger signed Senate Bill 657 – authored by Sen. Darrel Steinberg – the “California Transparency in Supply Chains Act of 2010,” into law on 18 October, 2010.

“Trafficking,” the governor announced, “is the worst of humanity and takes vigilance to eliminate. Slavery still exists.” Even with twelve million people enslaved each year – the vast majority winding up in this country – there is a general tendency to turn a blind eye to the situation. In response, beginning January 2012, SB 657 will require manufacturers and retailers in California to disclose their efforts to ensure that every link in their supply chains are free of slavery and forced labor. The law also requires the policy to be posted on the companies’ web sites.

California is the tenth-largest economy in the world, and in order to halt the flow of slave labor throughout the world, California must take the lead. Success in this endeavor requires collaborative efforts, as oftentimes companies and consumers unknowingly use slave labor. Slavery is frequently deeply embedded in a company’s chain of supply and, without transparency, will remain there.

Actress Ormond, an activist with the anti-human trafficking movement since the 1990s, said that the agriculture, mining and garment industries, and the products thereof, are notorious for using slave labor. Ormond says that this knowledge can be used as a map to illuminate the worst places and industries for trafficking.

Senator Steinberg noted that California’s position in the world market makes the state a top destination for traffickers. As much as SB 657 is a step forward in the fight against human trafficking and slavery, it is not a silver bullet. But it does cause government and businesses to take responsibility and work together.

The anti-human trafficking movement needs media support and corporate cooperation to leverage support. Businesses need to work with non-governmental organizations, and consumers must support best practices. Such collaboration, Ormond says, represents a watershed in the sharing of knowledge.

Kay Buck, executive director of Coalition to Abolish Slavery and Trafficking (CAST), co-sponsor of SB 657, said that awareness on the trafficking issue has created a demand for transparency in business practices, evidenced in the new law.

Accompanying Buck was CAST Survivor Advisory Caucus member, Flor Molina, mother of three from Mexico who was trafficked into the US and forced into the garment industry, sewing clothing that was sold in major departments stores throughout the country. Under round-the-clock surveillance, she was forced to work in appalling conditions for 18-plus hours a day, with only a ten-minute break, seven days a week. This “opportunity of a lifetime” cost Molina eight years until she escaped and was helped by the Coalition for Humane Immigrant Rights of Los Angeles (CHIRLA), which ultimately referred her to CAST. Said Molina, “Though I was an easy target for traffickers, I stand before you not as a victim, but as a powerful agent of change.” In an effort to help create a slave-free world, she works with CAST and was part of the task force that brought SB 657 into law.