Everyday Sunshine: The Story of Fishbone 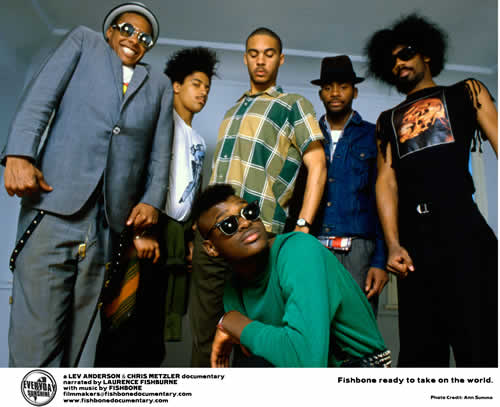 The tightly-made biopic traces the formation, deconstruction, and reconstruction of the Los Angeles band Fishbone.  Experimental and exceptional, Everyday Sunshine is a show of raw honesty and integrity of character that commands respect and admiration.  An already poignant behind-the-scenes-styled cinematic account is further intensified by Laurence Fishburne’s seamless narration, artful, Fat Albert-esque animation, and an array of interviews with the band’s family, friends, and celebrities ranging from George Clinton to Gwen Stefani.

Everyday Sunshine is the story of Fishbone from their 1979 beginning through present day.  Interweaving historical information intrinsic to their story, the individuals in the band as well as the band itself, are a testament to the times.
The band members first come together as a result of Los Angeles’ desegregation policies that included bussing students from South Central L.A. and Watts into the mostly white San Fernando Valley schools.  The intersection of cultures that turns strangers into friends—into Fishbone—is revealing of a connection that holds a mystical air of destiny.

Crossing boundaries in all directions with their ska-punk-funk-alternative fusion music and topical lyrics, Fishbone’s genre-smashing style is uniquely their own.  On stage, there’s a lot going on.  On one hand, the multiple musicians and instruments, including brass, are funky and mildly comparative to Rebirth, or maybe Karl Denson’s Tiny Universe.  On another, they share similarities with 80s punk and ska, speed metal, and 90s rock; but really, there aren’t enough hands to encapsulate their music.  In the words of Ice-T, Fishbone is “the OG, the original “original band.”  They cut their own path, and in many ways broke down barriers among music industry-created categories, as well as among divisions between black and white music.

Conversations with the band, especially founders Norwood Fisher and Angelo Moore, and their contemporaries offer astute commentary on the complexities of society then and now, politics, an array of “isms,” and the entertainment industry.  Contextualizing their life and times were certain external events in Los Angeles, such as the LAPD beating of Rodney King and subsequent acquittal that corresponded with all too well with Fishbone’s internal struggles and losses.

When the LAPD was absolved of accountability for their brutal mishandling of King, the overaching message was that justice would not be served.  Paraphrasing Norwood Fisher, it was devastating to realize that the system did not work for the black man.  This appeared to confirm that everything—not the least of which is the Hollywood music industry— is political.  Despite record deals, admiration from other celebrated musicians, an appreciable following and ever-growing popularity, the band never quite meshed with mainstream.  Fishbone seemed to be perpetually just on the edge of “making it.”

Speaking to Fishbone’s trials and tribulations, Flea (of the Red Hot Chili Peppers) says that healing requires a willingness to walk through one’s pain.  Though the band has gone through many changes, Angelo Moore and Norwood Fisher are still holding it down.  At the heart of Fishbone is a deep and abiding brotherly love that is only borne of a soulmate bond.  How else can one explain their faith in a shared dream, in visions of democracy, and in the healing potential of music and expressed creativity?

Everyday Sunshine is soulful and inspirational.  It’s an all-access pass into the past and present of the larger-than-life Fishbone.  The film gives props to the band’s South Central roots, reminding us of historical and current day realities in L.A., which in many ways is representative of the world at large.  Ultimately, Everyday Sunshine exemplifies the power of committing to a dream and the untold strength of the human spirit.

Everyday Sunshine:  The Story of Fishbone debuted at the L.A. Film Festival in June 2010, and is currently playing at film festivals internationally.  For screening info, see http://www.fishbonedocumentary.com/screenings.html.