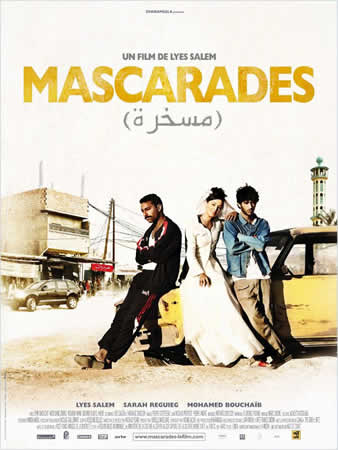 Clustering around the fictitious wedding between young, sweet, and narcoleptic Rym (Sarah Reguieg) and “a certain William Vancooten,” Masquerades lampoons Berber village life in mountainous Algeria. Although many of the characters are cartoonish, the cast is convincing and possessing of an alchemical sense of timing and wit.

Mounir (Lyès Salem), the servile yet egotistical gardener (“horticulturist engineer” as he calls himself) is insecure with his lot in life, which he ineffectually tries to bolster with Ali G-esque affectation—minus the “bling.” Bling, nonetheless, is Mounir’s seemingly unattainable objet desire. His childlike admiration of all things ostentatious, especially cars, is entertainingly emphasized in choice scenes. We see Mounir stand in open-mouth awe each time a cortege of black Mercedes races through the center of his tiny town. In another key scene he can’t resist slipping behind the wheel of the shiny black Escalade parked at his gardening job, and losing himself in reverie.

In many ways Mounir is a little boy acting out in macho defensiveness. Fiercely protective of his sister Rym, Mounir snaps under the unrelenting pressures of village gossip. Word on the street is that Rym in her narcolepsy is forever flawed, particularly in terms of marriage-ability. In a moment of drunken weakness, Mounir starts a rumour by blurting to the village that his sister is engaged to a rich and famous Australian (or Swede or Canadian or French— the nationality of this V.I.P. changes with every passing of the story).

With make-believe wedding arrangements allegedly under way, Mounir’s position in town skyrockets. His instantly acquired superstar status includes an entourage who also wants a piece of the action. While he is swept away by the showering of gifts and so-called respect, the rumour spirals out of control. With a falsely inflated sense of self, Mounir swaggers all the more. Even the normally stuck-up, catty women of the village elevate Rym from weirdo to wonder girl. Rym goes along with the charade; however, her motives have only to do with coercing Khliffa (Mohamed Bouchaib) — Mounir’s best friend and her secret paramour of the past four years— to marry her.

For a time, the sham wedding turns into a “Waiting for Vancooten” reminiscent of Christopher Guest’s “Waiting for Guffman” in which naïve, delusional small town community actors await discovery. Not unlike the “Guffman” characters, the villagers of Aurès prepare to meet their celebrity Vancooten who (it’s assumed) will descend wealth and fame upon them. Suddenly, the hopes of Aurès are pinned on this glamorous, mysterious Westerner.

On the surface, Masquerades spoofs the mentality and customs of the village. A closer inquiry, however, reveals underlying themes intrinsic to contemporary Algeria. All the yelling, arguing, and over-the-top physical comedy is not mere slapstick, but is actually point-making. Each detail in the film looks carefully chosen, perhaps, to subtly symbolize the state of affairs in Algeria.

The subject of sleep is employed (literally via Rym’s narcolepsy, and metaphorically through a general apathy towards change) to express both a staid system set in its ways, as well as avoidance and escapist tactics, indicating resignation and a suppression of desires. Dreams, too, are significant to the theme— through the sleep process, as in Rym’s narcoleptic sleep; in fantasy, as depicted by Mounir’s lust for wealth, and Rym’s yearning for true love, freedom and travel; and then at the visionary level, expressed by Rym’s and Khliffa’s shared dream of breaking away from their village.

The characters point to Algeria’s social and political undercurrents— trickling or surging depending on the perspective. Khliffa’s artistic spirit and efforts to build a video rental business is ironic given that cinema is fairly exceptional outside of Algiers, and that most Algerian media is censored to some extent. His character, therefore, suggests new— albeit tentative— thought. Representative of the old ways is Mounir who advocates groupthink, and makes the argument that in their village there’s but one road in and one out, and that nothing ever changes. He is stubborn and possesses an illogical attachment to tradition. He is under a compulsion to uphold the status quo. And then falling somewhere in the middle is Aurès assemblage, and their fantastical preoccupation with the West (a la Vancooten). They are in anticipation, exactly for whom or what, they do not know. Conceivably, this is suggestive of a similar biding of time occurring along side the changing tides in Algeria.

While Masquerades is amusing, I would submit, not for the purpose of sheer entertainment or distraction. Rather, as Algeria converges at paradigms old and new, Salem speaks to the larger and more vexing issues of struggle and change. The caricatures of Mounir, Rym, and Khliffa each demonstrate in their own way an unwillingness to accept a predetermined fate. Thus, Masquerades tells a story of human struggle, evolution, and of an incessantly repeating past; all the while pondering to what end.

The Arab Film Festival in San Francisco opens with Masquerades on October 14th, and at the Writers Guild of America in Los Angeles on October 22nd. For more information, visit http://arabfilmfestival.org.