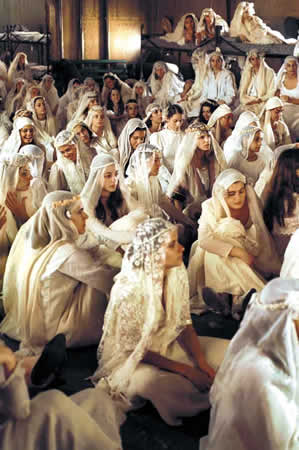 Visually striking, Brides opens up with a little known, actual event that took place in 1920s Asia Minor— the transatlantic mail-order bride business. In the summer of 1922 a ship left port in Smyrna, Turkey with 700 Greek, Russian, Armenian and Turkish brides for 700 prearranged grooms in the United States and Canada. Set on the heels of World War I, the Armenian Genocide in Turkey, and the Greco-Turkish War of 1919–1922, the majority of the betrothed girls on this particular voyage are war orphaned Greeks.

Commencing in a decimated, desperate Samothrace (northeastern Greece), we meet Niki Douka (Victoria Haralabidou) whose fate dictates that she be shipped to Chicago to marry the tailor Prodromos, the man to whom her older sister, much to her family’s dismay, was unsuccessfully married. Younger sister Niki is a seamstress; and thusly is the ideal replacement as the tailor’s wife.

Concurrently, we meet Norman Harris (Damian Lewis), the red haired Irish-American photojournalist covering the Greco-Turkish War. His photos record the atrocities of war, and memorialize what Norman calls “the minor things.” But when American newspapers repeatedly reject his photos, Norman gives up his work to return home to Detroit. His passage back is the same ship carrying the 700 brides to New York— though he’s in first class and they are in third.

The 700 girls, wearing numbers affixed to their clothing and expressions more befitting funerals than weddings, are herded like goats into their third class barracks. Here, the camera lingers over seven hundred haunted souls, seven hundred pairs of eyes that reveal heartbreak and trepidation. Dire circumstances have forced these girls to accept marriage to men they’ve never met. The marriages have been arranged through agencies, orphanages, church organizations and the like. Some of the girls carry a photo of their intended; and if they’ve been lucky, some have even exchanged letters.

Niki befriends oud-playing Haro (Evi Saoulidou), another Samothrace girl who’s frail in every way, and key to the story. En route to Canada per her father’s orders, Haro is inconsolable as she leaves behind her love, Antonis.

Out to sea, Norman becomes fascinated with the brides, and undertakes a project to photograph each one in her wedding gown. Intent on photographing Niki, Norman gradually draws her into his sphere of focus.

During this same time, Niki is hired to sew costumes for the entertainment troupe on board in first class. Working in first class, she meets the palm reader, Emine (Andrea Ferreol). When Emine attempts to read Niki’s palm, Niki resists; she’s sure that she already knows her fate. But when Norman falls for Niki in what endeavors to be a “Titanic” styled romance, the plot— and the subplots, of which there are many— thickens.

Also aboard the S.S. King Alexander is the Georgian intermediary/human trafficker, Karaboulat (Steven Berkoff). He arranges marriages for Russian girls, and unbeknownst to some of them, prostitution. Karaboulat has the crude speech and demeanor of a “goodfella,” and is easy to hate.

The dialogue (most notably with Karaboulat) is sometimes mismatched to the period. Certain words, gestures and posturing are distinctly 21st century. Karaboulat’s repeated use of the “f-bomb” and the “c-word” in reference to a certain part of feminine anatomy is especially offensive, and not exactly convincing of 1922 parlance.

Nonetheless, Brides (Winner of 10 Awards: International Film Festival of Thessaloniki 2004, including First Prize for Best Feature Film) is primarily filmed in Greece and therefore delivers a cinematic treat with its scenery, music and costumes from the period. The wedding dresses in particular are to the story’s credit.

The film imagines the bittersweetness of individual lives and whole cultures at a historical turning point. Rich in shock and surprise, Brides is an interesting take on the position of women at the time, issues of tradition, identity, freedom and justice. As old world ways are confronted by new, these brides helped usher in a new breed of western-bound pioneers— if not by choice, by necessity.

Executive Producer Martin Scorsese has said, “Brides an important and special project to me. I am a true admirer of Pantelis’ films and respect his vision and unique style of storytelling. The thought of his work reaching an American and international audience is extremely exciting.” Stay tuned for American distribution.