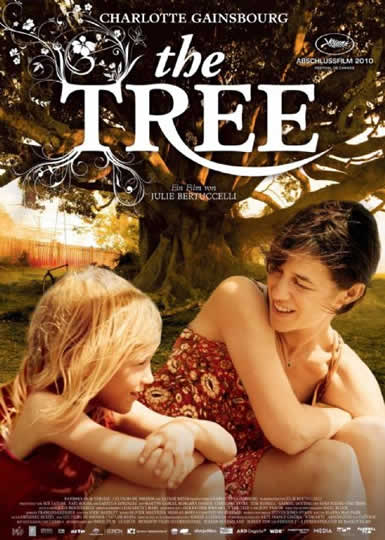 Julie Bertuccelli’s (Since Otar Left, 2004) The Tree (adapted from Australian writer, Judy Pascoe’s 2002 novel Our Father Who Art in The Tree) is centered around a family homestead something akin to a hippie compound on the outskirts of the agri-industrial township of Boonah in Queensland, Australia.  Considered the “heart of Australia’s scenic rim,” Boonah is at once visually desolate and bursting; beautiful in its extreme ruggedness, making it the perfect landscape for telling the tales of The Tree.  Through the lens of the Australian outback, the everyday and ordinary become magical.  Grégoire Hetzel’s music works especially well, too, in assisting to create a tree-personifying backdrop for the film’s namesake—a giant Moreton Bay Fig tree—that is mirror to familial traumas, human relations and acts of nature of both mythic and earthly proportions.

The film opens with husband Peter (Aden Young) and wife Dawn (Charlotte Gainsbourg) cuddling in a hammock under an expansive, starry sky.  Their conversations communicate long-term happiness, depth of bonding, and more subtly, a peculiar sense of foreboding.  Dawn asks Peter how long he will need to be away, presumably for work.  Just a few short scenes later, death rips Peter from Dawn and their four children’s lives.  Wracked with grief, Gainsbourg as the widowed Dawn is awe-inspiring in her pain.  The intensity with which she mourns makes it hard to image that she is merely acting.  When Dawn retreats to her marital bed, clutching at the sheets and curling into herself, her anguished sobs are frighteningly palpable.

Meanwhile, Dawn’s three sons and eight-year old daughter, Simone (Morgana Davies), are coping with their father’s death in their own ways.  Simone awakens at night to the sounds of the Outback and the branches of the enormous fig tree creaking in the wind.  She scurries out into the blackness and climbs into the tree’s safe embrace.  Nestled amongst the limbs, ear pressed against a branch, Simone hears her father “speak.”  The tree becomes Simone’s source of solace to which she returns throughout the movie.  Convinced that her father’s soul lives and communicates through this tree, Simone attaches herself to it—physically and emotionally—until she is irrevocably forced from it.

As the camera travels across the lush-barren terrain of the natural world, every ant, every bat, every frog, every sliver of light, and especially the tree, symbolize a winding journey back to life.  Little Simone says that she chooses to be happy in spite of her profound loss.  But before doing so, she and her brothers (and eventually their mother too) identify with the tree.  Severe drought and strict water rationing have deprived the massive fig tree of water, effectively driving the roots above ground.  The roots are so powerful in its quest to quench that they manage to rupture the house’s foundation and plumbing.  When the ever-expanding roots eventually fracture a neighbor’s property, the tree is under threat of removal.  Like Julia Butterfly Hill who camped out in the branches of a Giant Redwood in the late 90s resolute to prevent its destruction, Simone plants herself in her father-fig tree and refuses to budge.

In the end, the tree is uprooted by the otherworldly might of a cyclone, and in doing so uproots the family too.  As Dawn and her children drive away from their storm-demolished home, the mood is one of beginnings more than endings.