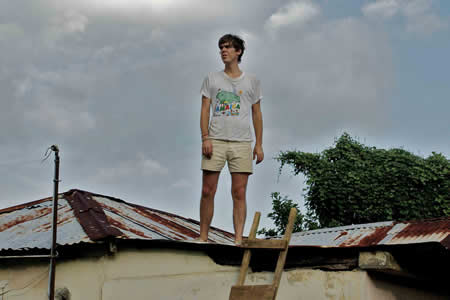 We first meet Max (Sean Bones), the twentysomething, almost hip, Generation Y guy, playing street soccer in his Brooklyn neighborhood— the significance of which is later revealed as integral to gripping a foothold in a distant land. The next scene is of Max – six-pack of Red Stripe in hand – and his girlfriend, Willow (Norah Jones whose cameo upgrades the film right away). Despite being booked for a couple’s cruise to Jamaica that sets sail the next day, Willow ditches Max. But after a night of commiserating and boozing with his mates at a local pub, Max decides to cruise solo.

Ostensibly, this is a story about a guy who gets dumped, then encounters a series of bad breaks. Especially as most of the story takes place off home soil, these challenging circumstances could have lent itself as fodder for real emotional vulnerability and evolution. Instead, the lead’s quasi-cool persona persists.

From the outset, unnecessary footage is spent on establishing Max as a slacker. Take the toilet shots, for instance: Max urinating the morning after; Max retching the excesses of drinking. Perhaps to the writers, directors and producers, these contributions assist in depicting their protagonist as slightly void and narcissistic, as one who’s yet to come up against life’s more serious problems. These points, however, are convincingly conveyed even without the bathroom close-ups. Luckily, the story improves.

On board the cruise ship, dejected depressed Max finds himself mostly lonely among the ship’s predominantly coupled senior set. Once ashore in Jamaica, Max is quick to befriend locals who take him to their best beach where indulgences in Red Stripe and reefer cause him to take leave of his better judgment— and his backpack. Leaving his personal belongings, passport and money unattended, Max takes an ocean dip. He quickly sobers to the reality that, post-swim, everything – even his shoes – is now gone.

Without his passport, he is unable to gain reentry onto the cruise ship. On instructions to go to the American Embassy in Kingston, the remainder of the film is Max’s eventual journey home. From this point, the film work becomes a more vibrant portrayal of Jamaican life shot through the lens of raw urbanscapes, shantytowns and countryside. The juxtaposition of Max in Jamaica is accentuated as he traipses his lanky, pasty-white body around the colorful island wearing only a pair of shorts.

Wah do dem, Jamaican Patois that translates to what they do, or what’s wrong with them, poses as a statement summing up local culture and customs, or perhaps more subtly, questions these norms. However interpreted, Wah Do Dem is a centrifugal force that explores the ways in which cultures clash, and in the places where they meet. Jamaica is a nation of dichotomies, and this is effectively demonstrated throughout Max’s trek.

For example, when the bus that’s taking Max to Kingston breaks down, he finds himself deposited in a shanty settlement off the beaten track. Here is he welcomed, invited to join in a community soccer match, and is even fed. Later, still on the road to Kingston, a would-be-assailant-turned-bodyguard grants him safe passage into the urban jungle.

Throughout his many mishaps and near misses, Max is looked after. Surprisingly, he never seems particularly grateful, or any less self-entitled. In the end though, the viewer may imagine that Max’s experiences bring greater depth and maturity to his underdeveloped character. Overall, “Wah Do Dem” is an interesting mix of well-intended plots, crafty cinematography and amazing scenery with a dope Reggae soundtrack. For more info, visit http://www.wahdodem.com