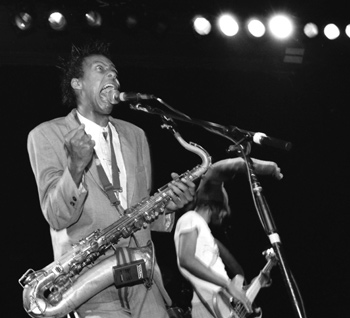 PBS – “Everyday Sunshine: The Story of Fishbone” from Tilapia Film on Vimeo.

The several-decades strong pioneering spirit of the iconoclastic band Fishbone continues to break new ground as much as in music as in social order. In a nation still reeling from 1980s Reaganomics, sanctioned racial profiling and torture, Fishbone descended on the massive South by Southwest festival with its still powerful message in Lev Anderson’s and Chris Metzler’s new film “Everyday Sunshine: The Story of Fishbone.”

Crossing boundaries in all directions with their ska-punk-funk-alternative fusion music and topical lyrics, Fishbone’s genre-smashing style is, in the words of rapper Ice-T, “the OG, the original ‘original band.’ ” Fishbone literally grew out of southern California’s shifting racial fault lines. The band members first came together as a result of Los Angeles’ desegregation policies that bussed students from South Central and Watts into the mostly white San Fernando Valley schools. The intersection of cultures that turned strangers into friends, and into Fishbone–a band that defied the idea of what black and white music are supposed to be and, in the process, won wild acclaim from its peers, if not the marketplace.

“Everyday Sunshine” interweaves the broader political history that shaped Fishbone with the story of the band itself. It is a testament to the times then and now. The film puts the band’s development in context of Los Angeles’ difficult history, such as the 1991 LAPD beating of Rodney King that set off civil unrest in which more than 50 people were killed. Band founder Norwood Fisher tells the filmmakers it was devastating to realize that the system would not work for a black man. Fisher has said that the case was crushing to the band’s sense of optimism, and had a profound effect on their art. For Fishbone, the LAPD exoneration seemed to confirm that everything–including the Hollywood music industry–is political.

Despite admiration from other musicians and a strong niche popularity, the band has never meshed with mainstream. “Everyday Sunshine” offers a variety of explanations for this fact, including racism. Fishbone’s perspective, however, is not one of lamentation. Rather, their goal is to live and create music authentically and without compromise, to be guided by an internal compass instead of external dictates. That perspective has been the force behind Fishbone, and the force that’s broken down barriers in industry-created categories that dilenneate black and white music.

I connected with filmmakers, Metzler and Anderson, at the film’s SXSW screening to discuss the relationship between Fishbone and the times from which the band grew.

Colorlines: This documentary is much more than a “meet the band” pic. What compelled you to tell the story of Fishbone? Were there political reasons behind your decision?

LA & CM: We were first drawn to the Fishbone story because it is a tale of outsiders, a bunch of young guys who fit in everywhere and nowhere simultaneously. It’s a story of six independent thinkers who carved their own path, set their own rules, and succeeded and failed all at the same time. The many dramatic narratives we could follow intrigued us! Because Fishbone’s existed for 30-plus years, we had all these time periods and places to cinematically explore, from the predominantly white hardcore punk mosh pits of the early ’80s to the rising gang epidemic in South Central Los Angeles to the heroin-chic grunge era of the ’90s.

The cross section of larger social issues that Fishbone has lived through really spoke to us. We always felt that if we were ever going to make a “music doc,” we’d want a story that would allow us to go beyond the standard music documentary protocol. With “Everyday Sunshine” we wanted to tell a story about a group of unique musicians who would also speak to larger social issues that affect us all–whether we’re artists, music fans, or “ordinary” citizens in a [so-called] democracy.

That said, we think Fishbone’s music and live performances kick ass. And while the band’s music and individual talents definitely merit highlighting along the rock ‘n’ roll spectrum, the band members themselves have always commented on what’s going on around them as African-Americans in a society and industry that stereotypes or expects certain things from artists of a particular ethnic background. Fishbone shattered a lot of social stereotypes about what music a black man could play in the 1980s and 1990s, which, in our opinion, certainly merits a look back. At the same time, these guys are charismatic and fun people to follow around; the result of which has been fun filmmaking.

Were you met with any resistance in terms of the information that would be revealed about the music industry, for example?

Not really. Most people were pretty open and honest about the issues that existed–and still exist–in the industry, especially when it comes to what’s considered “white” and “black” music. The film examines some of the issues that may have complicated matters for a band looking to become rock stars. Even with that candor from interviewees though, as filmmakers we didn’t want the story to get too bogged down by industry-insider info concerning why a band like Fishbone didn’t commercially “make it big” in the way that many people thought they would. We felt that that would take away from the story of what the band was really about, particularly as Fishbone was never really that interested in fitting into the artistic molds that the industry may require for greater commercial success. Fishbone always thought of themselves as outside the system; making their own unique mixture of art was what they considered a success.

What is your angle for screening at SXSW? Is there a particular audience there that you hope to reach?

SXSW is rock ‘n’ roll from floor to ceiling, and the story of Fishbone is straight up rock ‘n’ roll. So that alone would be reason enough. Because many of today’s indie rock fans may not be familiar with Fishbone and would likely dig the band’s independent streak, we are excited about this opportunity to expose audiences and newer musicians to the band’s story–successes and struggles. Fishbone has paved the way for today’s up and coming bands to be authentic and true to their own voice despite the strictures of genre. Plus, SXSW is not only a large music festival but a prestigious film festival, too. It winds up being a great synthesis of two art forms, and therefore, a way to share the film with different types of audiences all at once.

MG: Did you purposely aim to screen the film near the 20th anniversary of the Rodney King beating and trial?

We did not purposely screen the film so close to the Rodney King anniversary, but it is a nice bit of serendipity that helps to emphasize the real issues that people are dealing with today just as they did 20 years ago. While some things have gotten better over the years, there are still problems with racism in society–for example, the treatment of African-Americans by law enforcement. “Driving while black” is still a concern, and such profiling extends into the Latino and Muslim communities as well. We are hopeful (and would be thankful) if revisiting history via this film helps to spark people into action and instigate positive change.

Aside from the obvious reasons that one hopes to achieve success with their film, what are your goals for publicizing the story of Fishbone?

In the end, the story of Fishbone can be an inspirational tale for anyone who may feel like an outsider or who may deviate from societal expectations. In many ways, Fishbone illustrates that it’s okay–right, even–to be different, to have an open mind and ideas and perspectives that are outside the norm. While Fishbone never made millions, they created a musical legacy that has already inspired countless people. Publicizing their story will only inspire more; and so ultimately, the purpose of the film is to inspire others on their own unique path.

How do you think the era from which Fishbone developed impacts American society today?

As a society we are still dealing with the lingering issues of the post-civil rights age. Racism and other social prejudices are still big issues in America. Maybe a band like Fishbone, which among other things helped [racially] integrate the punk rock clubs in the ’80s, provides inspiration for people who are looking to cover new ground or cross over the perceived barriers that sometimes keep us apart. The inspirational message of “Everyday Sunshine” is not necessarily to do just what Fishbone does, but to find your own voice, be comfortable in your own skin, and do your own thing.

This article first appeared on Colorlines