Gatekeepers of Truth: A filmmaker, a guitarist, their friendship and her run for governor 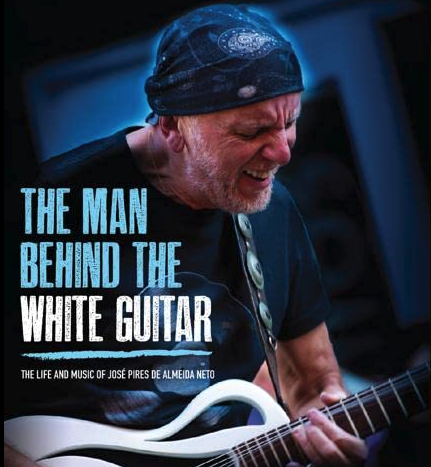 Sometimes, artistic testimony gives greater pause for reflection than in-your-face dramatics. Case in point: The Man Behind the White Guitar.

The new documentary on the life of Brazilian-born and longtime Fairfax-based musician and composer, José Neto, is deliberate, chill and unfolds at a pace that allows for contemplation and critical thinking. Not surprising, as producer and local filmmaker Barbara McVeigh is also an educator, activist and parent who is in the habit of utilizing the arts to bring awareness to matters of consequence.

Providing social context and commentary, the film indirectly examines the power structures, value systems and socioeconomic inequality that defined Neto’s career. More directly, the film addresses the highs and lows of the universal human condition, including deep loss, which, in the time of Covid-19, offers relatability, as well as rays of hope.

Growing up in a provincial town, Neto’s early life in Brazil was filled with music. Trained at home by his parents, he gained mastery of the guitar early on. By age 13 he was gigging in Rio de Janeiro. Four years later, his dad introduced him to Jimi Hendrix’s “Cry of Love,” and Neto’s life changed forever.

Traveling the world for 30-odd years with social-justice band leader, Harry Belafonte, as well as with iterations of his own band, Neto collaborated with musical greats, including Steve Winwood, Carlos Santana, Flora Purim, George Harrison, Herbie Mann, Jim Capaldi, Jorge Dalto and Airto Moreira. Belafonte attests, “What Neto did for me was to validate what it means to be different, to validate how beautiful diversity is … and that artists are the gatekeepers of truth, civilization’s moral compass.”

McVeigh’s film projects—whether on climate justice or the arts—are based on a moral compass that was set early on. Two of her international projects, one of them the Neto film, the other a film about our oceans, were made in cooperation with world-famous scientists and celebrity musicians, and with very little funding. Realizing that humanity now faces some of its greatest threats to existence, each project was propelled by a tireless commitment to justice.

Recognizing Neto as a “gatekeeper of truth,” McVeigh saw in him something of a kindred spirit.  Neto’s music goes where politics, media or even dialogue sometimes doesn’t. When asked to explain how, Neto credits the transcendental nature of art itself. “I have to remain respectful of the natural, creative impulse that comes from a mysterious place,” he says. “The gift doesn’t come from me, but [through] me.”

If McVeigh identified a kindred spirit in Neto, it could be because she, too, experienced a defining moment at age 13 that led her to embody art and activism. A casualty of Reaganomics, McVeigh’s familial upheavals are shared in her 2016 memoir Redemption: How Ronald Reagan Almost Ruined My Life.

As she explains in her book, she began to find her political footing at age 13, when her father participated in the 1981 National Union Strike of air traffic controllers. She recounts terrifying nights of waiting for the FBI to come and arrest her dad, along with the other 11,500 union members, most of whom were Vietnam Vets. Financially and emotionally devastated, McVeigh’s family, along with the other families, paid a heavy price for the strike that effectively marked the beginning of the Reagan Era.

“I got the greatest education possible, the understanding of the ‘power of the people.’ When you realize that it actually only took 11,500 people to nearly shut down the American economy, that’s empowering,” McVeigh says.

McVeigh’s commitment to justice extends to her bid for California governor in 2022. She doesn’t come from privilege. If her candidacy has a soundtrack, it’s Neto’s music.

Neto explores wide-ranging, inherently Brazilian, harmonies, and loves to jam. For musicians, jamming equates with breaking through barriers and building bridges across cultural, racial, political and linguistic differences, which may be the transcendence of which Neto speaks. It’s what audiences and listeners experience, and perhaps why, even now in his 60s, he continues to record and jam. Neto’s intercultural capabilities are yet another parallel found between the filmmaker and her subject. A champion of the strength of California’s diversity, one of McVeigh’s platforms is a commitment to working with Latin American neighbors inside and outside of the state’s borders.

While Neto’s way is through music, McVeigh puts her values into action through filmmaking and gubernatorial candidacy. Neto is of, for and by the people—something else to which McVeigh relates, especially as a lifelong Californian educated in both the school of hard knocks and the state’s university system. An experienced organizer, McVeigh is working to help reposition California as a leader in environmentalism, much as it was under the auspices of President Jimmy Carter and Gov. Jerry Brown.

The former president is a source for her inspiration and political will, evidenced by her Carter commemorations that recur every October in California. Officially endorsed by State Senator Mike McGuire and Assemblymember Marc Levine, the events are televised on Marin TV where she also co-hosts the People’s Environmental News. McVeigh’s work finds additional endorsement by the likes of Peter Coyote, C. Brian Wilson, Noam Chomsky, Naomi Wolf, Mikhail Gorbachev and Spencer Christian.

In keeping with her previous endeavors, The Man Behind The White Guitar is a story of redemption. Making its way through international film festivals, it has so far won best documentary at the Alwar Film Festival and Madras Independent Film Festivals, honorable mention at The Hague Global Cinema Festival and was the semi-finalist best feature film at New York’s Continental Film Festival. Future screening information can be found at the film’s website themanbehindthewhiteguitar.com.

As for the filmmaker/gubernatorial candidate, follow her online at barbaramcveigh.com and perhaps on to Sacramento in 2022.

Published April 21, 2021 in the Pacific Sun and Bohemian.
Share