“I was a French Muslim: Memories of an Algerian Freedom Fighter” 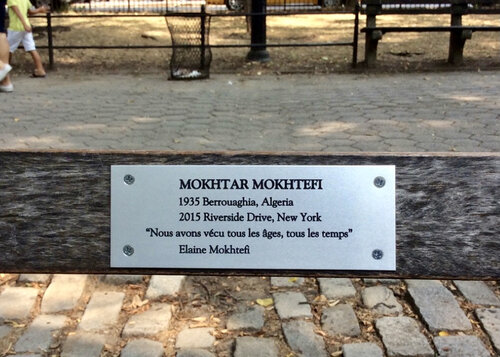 I was a French Muslim, Memories of an Algerian Freedom Fighter, by Mokhtar Mokhtefi
Translated by Elaine Mokhtefi
Other Press (Sept. 2021)
ISBN 9781635421811)

From 1830, Algeria was France’s longest held colony. By the beginning of the Algerian uprising, nearly 125 years later, more than one million European settlers, roughly four generations, had called Algeria home. It had become such a popular destination for Europeans that for the French to give it up was unthinkable; unthinkable to the point of dismissiveness when Algerian grievances and aggressions started to surface.

Coinciding with the end of WWII, anti-colonial sentiment was brewing in Algeria and around the world. Algeria’s National Liberation Front grew from a small and scattered upstart movement to become a force with which to be reckoned, complete with an organized and trained National Liberation Army. With odds stacked against the nationalists, yet driven to throw off the yoke of colonialism by any means necessary, Algeria took on France, then the world’s fourth largest military power.

From November 1954 until the March 1962 signing of the Évian Accords, the Algerian War for Independence raged. Before the diplomatic pact brought an end to one of the bloodiest and most violent periods in France’s history, the “inventors of human rights” had employed guerrilla tactics, systematic torture, and civilian attacks even with Napalm on its Algerian subjects. France lost credibility on the world stage, and French society splintered, the repercussions of which continue to reverberate even today. Though France had claimed Algeria as its equal, invoking the tripartite motto (albeit conditionally), it had effectively reduced the native population to second-class status. This was the Algeria that Mokhtar Mokhtefi (1935-2015) was born into. And so from a young age, Mokhtefi cultivated a strong sense of fairness and justice.

Astute and sophisticated beyond his years and means, his exceptionality was recognized by a French elementary school teacher who groomed Mokhtefi for the lycée. A rarity among the 90% illiterate population, he left his village home to board at a French boys’ middle and high school. Just as he excelled in school, he later excelled in the signal corps of Algeria’s newly emerging army.

Mokhtefi wrote I Was a French Muslim towards the end of his life and in the present tense.  A record of his memories and journal writings, beginning with childhood, then detailing his time in the National Liberation Army as a radio operator and head of communications, he ends the book at Algeria’s independence. The use of French Muslim in the title is not arbitrary or facetious, but comes from an actual designation used by the French colonial government. Elaine Mokhtefi, the author’s expat American wife and translator, explains in the preface that this particular labeling of native Algerians was a function of the structural inequality and duplicity in the colonial bureaucracy. They governed, she writes, “by violence, trickery, and hate” (ix). Moreover, that the professed secular state categorized citizens by religion was an irony not lost on either Mokhtefi.

In spite of colonial subjugation, Mokhtar Mokhtefi was highly educated, and thrilled by the likes of Socrates, Bergson, Hugo, and later Marx. “I’m Frenchizing,” he observes of himself in the process, realizing that he’d eventually need to sort education from inculcation (91). Because of colonial subjugation, he was passionately dedicated to a free and equal Algeria. How long, he wonders, can the French maintain its divide-and-conquer stance in the Maghreb? How long can it crank out hundreds of thousands of boots-on-the-ground in Algeria?

Accustomed to the stratifications of colonized Algeria and its own tribalistic divides, when Mokhtefi goes to Morocco at age 21, Moroccan hierarchy demotes him, an Algerian, to “second-category Frenchman.” That he’s an intellectual only adds to the rancor, as well as works against him when he confides in other Algerians in Morocco of his longing to join the underground Algerian National Liberation Army. His romantic view of the struggle elevates Algeria as his truest love, but like anything placed upon a pedestal, there’s bound to be a fall from grace.

Algiers, the Black Panthers and the Revolution, a review of Elaine Mokhtefi’s memoirs, by Anthony Saidy

After offering to distribute Résistance Algérienne, the newspaper of the National Liberation Front, his compatriots take him more seriously. Finally, his “day of glory” arrives, and acceptance in the National Liberation Army begins with months of clandestine training in Morocco and Tunisia. With no command of Arabic and extremely poor eyesight, he’s rather ill-suited for bootcamp. He blames the French colonizers for his ignorance of Arabic, and looks forward to what the Revolution will teach him about his homeland.

The Revolution and its attendant military training, disturbing tests of courage, and demands for unwavering loyalty are indeed revelatory of Algeria and of himself. At a certain point, Mokhtefi’s column is sent to the “interior,” necessitating treacherous border crossings. The commander informs the column that “three-quarters will die, either from stepping on a mine or hitting the electrified fence. If you’re not ready to make this sacrifice, speak up. Later will be too late (215).” If Mokhtefi ever considered backing out, he doesn’t share that with readers.

He writes of the Morice and Challe Lines, the French-installed electrified borders between Algeria, Morocco and Tunisia were purposed to dissuade the progression of the Algerian National Liberation Front. Named for French Minister of Defense, André Morice, the Morice Line was powered by 5,000 volts of electricity, entangled with barbed wire, and accompanied by minefields on either side of the border. The Challe Line, named for General Maurice Challe, doubled the danger; and, in fact, this danger lingered well after the end of the war. For decades, leftover landmines were the cause of undue civilian casualties.

As much as Mokhtefi was Algerian, his western education and travels provided him with a broad worldview. He’d embraced liberté, égalité, fraternité, and sought dignity and justice for all.  According to Elaine Mokhtefi, in his last years Mokhtar took to wearing a label pin that read, “I am a world citizen.” Worn neither carelessly nor with contradiction, she says, the gesture seemed to convey that though his nationalistic illusions were long gone, Algeria remained in his heart (xxv).

He’d wholly devoted himself to a unified Algeria, but his ideals had become contaminated. He failed to comprehend such inner divisions as those between Arab and Berber, peasantry and nouveaux riches, or among those who spoke with varying regional accents. These differences and ensuing social slights or open mistreatment of one another appeared petty and futile, particularly after 130 years of French rule, the final eight further marred by the brutalities of war. He was disappointed by a seemingly unrelenting resentment towards the literate, and perpetuation of the “complex of the colonized.” Mokhtefi had endless empathy for the traumatized, but no patience for hypocrites, brutes, and fools (323).

At the war’s final stages, Mokhtefi is aggrieved by the incompetence of a soldier who can’t read. “Ignorance out of the barrel of a gun is preparing us for bitter tomorrows,” he writes, disillusioned (399). Perhaps it foreshadowed the complexities of nation healing and building, and peace making. Postcolonial Algeria was a ground zero of sorts, socioeconomically bereft, and with a provisional government fraught with discord. Often, authoritarianism has a way of reformulating and repeating itself, and Algeria hasn’t exactly extracted itself from that blueprint.

I Was a French Muslim is the opposite of light reading, but it’s not without humor. Mokhtefi’s witty commentary illuminates his buoyancy even in the midst of destruction and heartbreak.

Che Guevara famously asserted that it is impossible for a genuine revolutionary to exist without the guiding force of intense love. Correspondingly, Mokhtefi’s revolutionary zeal inspires awe. His story is a page-turner, if not also a multitude of acronyms and aliases of which to keep track. Nonetheless, his colorful portrayal of the character of time, place, and people in colonial, wartime Algeria provides captivating reading, as well as context for the relations between France and Algeria then and now.

Colonial Algeria had been genetically modified. As such, Mokhtar, his generation, and succeeding generations that lived through civil war (1991-2002) were never quite free of a legacy of mutations and mutilations. Formed from a French imagined sense of “civilization,” the artificially-engineered society, replete with its stratifications, injustices, and obstructions, lingered in Mokhtar’s “innermost thoughts and feelings” (xxi). But from 1995 onward, the Mokhtefis made their home in New York’s Upper West Side where, according to Elaine in a 2018 interview with author Suzanne Ruta, Mokhtar found resonance and contentment in the multicultural city.

Though Mokhtar didn’t live to see Algeria’s 2019 Hirak (“The Movement”), Elaine is sure that he would have cheered along with the protest cry to “let us live, give us back our country, give us back our past, enough is enough!” Making peace with his legacy in the sunset of his life, Mokhtar affirmed, “Algeria lies under our feet and in our hearts until death” (xxv).

Approximately three years after Mokhtefi’s passing, in 2018, President Macron became the first French leader to publicly hint at France’s war crimes in Algeria. And finally, the remaining landmines along the Morice and Challe Lines were fully deactivated and removed by the Algerians, with French cooperation, that same year.

As Mokhtefi’s memoir reveals, the ghosts of the Algerian war live on in both countries. Last January, while refusing to issue an official apology for his nation’s abuses during the occupation of Algeria, Macron proposed a truth commission to shed light on France’s colonial past.