Ilia Darlin: The “European Answer” to Lady Gaga is Greek 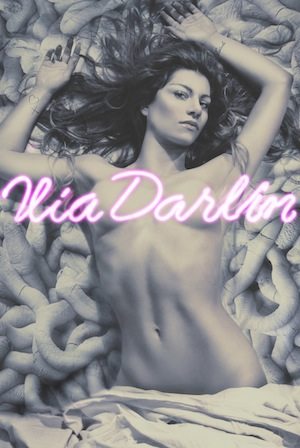 Possessing a larger-than-life stage presence, Ilia Darlin is frequently touted as the “European Lady Gaga.”  Though there may be some similarities between the two icons, Ilia has captured a worldwide fan base of her own.

Athens native—singer, dancer, musician, fashion model and actress—Ilia Darlin, is making her mark on the international scene.  Among her array of accomplishments, Ilia has been the subject of a bio-documentary (MadTV, Greece’s ever-popular music channel), and has had a starring role in Greek director Nikos Perakis’ docu-fictional film, “Art Therapy”.  She also performs most of the soundtrack.  Ilia is a classically trained musician and  writes all of her songs.

In this exclusive interview, Ilia reveals her “Greekness,” her warm spirit, sharp wit, and a peek into the heart of her art.

How has your training in classical ballet and music helped prepare you to cut your own path, or to break the rules, so to speak?

One can change something if they know how it works; so in that sense it helped me. For example, Picasso after learning how to draw a vase decided to start drawing in his own crazy personal way.  Knowing the base of dance and music can help you explore and find your own style.  People usually want something to rebel against, and in my case, I quit ballet and started working as a dancer in nightclubs.

You seem to be a natural performer—naturally gifted in the artistic realms, including music, dance, and acting.  Is being a performer an innate part of who you are, or is it something you’ve had to cultivate?

It is who I am.  When I was a kid I would perform to my family, my neighbors, my friends with stupid “artistic names.”  If I didn’t have the chance to perform in front of people, I would still do it in my house.  There is too much drama in me that needs an outlet. Performing keeps me balanced.  However, there’s always a need for cultivation, as there is for evolution and improvement.  I’m a very hard working person and a perfectionist; I would never stop practicing and working on my art.

How do you feel about being compared to Lady Gaga?

Well, personally, I don’t think we have any similarities apart from the fact we’re both “products” of our days.  I think though it’s normal because in order to understand something new, we need to compare it, categorise it in a way.  She was compared to Madonna when she first came out, and now I’m being compared to her.  However, as people see more of me they’ll understand what I am all about.

Are your songs reflective of you personally?

Definitely.  My music and image are a reflection of my personality, my experiences— past, present, and future.  That’s why I don’t have songs given to me.  I have to know and feel what I’m singing about.  My songs are like a cathartic release.

Was the documentary “Art Therapy” your first foray into cinema?  How is working on camera different from live performance?  Do you have plans to continue working in film?

“Art Therapy” was my debut in cinema and I really enjoyed it.  The process is very different, but the same at its core ‘cause both in singing and acting you need to reenact a feeling, a situation.  Only when you’re acting in a film you have the chance to do it again and again till you get it right; whereas when you perform live, it’s a one shot thing.  The audience won’t give you a lot of chances to bond and communicate with them.  You have to captivate them instantly in the first song.  At the moment, I’m concentrating on my music, but I would love to play in a movie again.  I like change and variety.

Where in Greece are you from?  Do your home community and country support your work?

I am from Athens.  I grew up in the northern suburbs of Athens, but created bonds with people who lived in the centre where the underground scene of Athens flourishes.  I’m very grateful for the support everyone has shown me.

Is being Greek linked to your personal identity or experience of yourself?  If so, how does your “Greekness” inform who you are in the world outside of Greece?

Oh yes!  100%!  I grew up in Athens and I’m very proud of my heritage.  It is what makes me different and I wouldn’t change it for the world.  I’m loud, expressive, I love food and I can’t live without the sun.  I’m very hedonistic like most Greeks, and the fact that I’m so dramatic is not a coincidence.

Are there any notable differences between working in the U.K. versus working in Greece?

I have to say yes.  Different cultures and different mentalities.  There is a strong sense of bureaucracy in London, whereas in Greece things are more relaxed.

What was your experience of Los Angeles?  Can we expect to see you working in L.A. in the future?

Despite the accident I had there, which inspired me to write “Car Crash,” I had an amazing time in L.A.  I recorded in the studio that Michael Jackson recorded many of his songs, and I would see signed posters of him all over the place.  I met so many people who I’ve admired for so long.  It is a dream place for me, and I hope my career takes me there.  I would love to move in L.A permanently.

Where do you get your inspiration?  Who are your role models?

My inspiration comes from my dreams, from what I want to achieve in life, from my needs and urges.  My role models are strong female figures.  I’m obsessed with Maria Callas.  I love the fact that they used to call her “Tiger.”  She was fierce on stage and off.  Her passion made her unique.  Melina Merkouri is also my role model and “Darlin” is inspired by her role in “Never on Sunday.”  I appreciate her work in Bringing the Marbles Back.  I hope I can contribute to that goal too one day.

As an inspiration, or role model, for other women and girls, is there a particular message that you aim to communicate via your art (music, dance, visual and performance work)?

I want to inspire strength in women, to help them be fearless and true to themselves.  I want to help them chase their dreams ‘cause dreams are enduring— they’ll find you wherever you go! Women need to realise their power in this world.   The power of P.O.P. is immense!  This will be the title of my new song.

“The path of excess leads straight to the palace of wisdom.”

Maria Callas encapsulated the essence of her life’s work when she said, “An opera begins long before the curtain goes up and ends long after it has come down.  It starts in my imagination, it becomes my life, and it stays part of my life long after I’ve left the opera house.”  As if speaking for Ilia Darlin too, Ilia lives her passion on and off the stage.