Interview with Paul Watson Guardian Angel of the High Seas 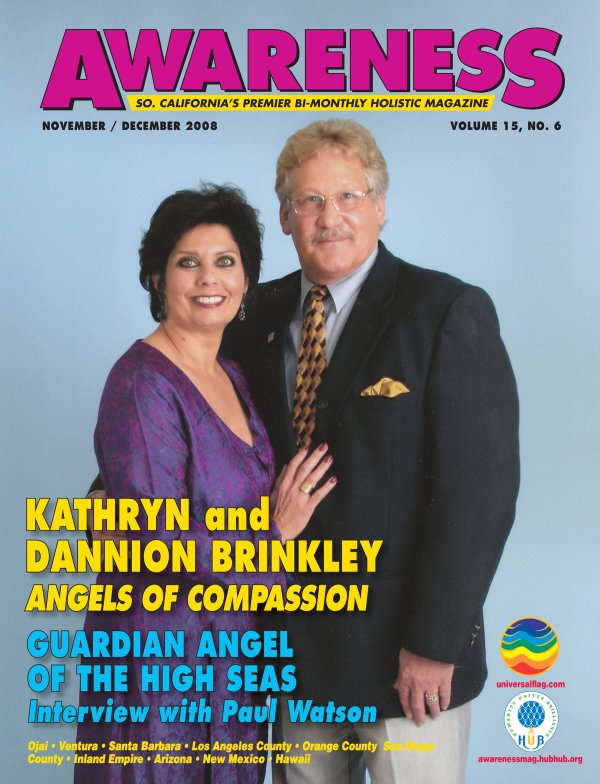 Captain Paul Watson is a man on the mission of a lifetime: to protect our ecosystems and endangered species, and to stop the annihilation of sea life worldwide. Since founding the Sea Shepherd Conservation Society (SSCS) in 1977, Watson and his volunteer-only crew risk life and limb eradicating illegal whaling, poaching, shark finning, and oceanic habitat destruction.

Prior to establishing SSCS, Watson co-founded and directed Greenpeace, as well as co-organized the first anti-whaling campaign. Prolific author, highly sought after international speaker, and recipient of an impressive array of awards, he now adds “starring role of nighttime TV drama” to his list of accomplishments!

Throughout his heroic career, Watson has achieved much notoriety. It is no wonder that Animal Planet targeted Captain Watson ‹ the man who’s been labeled everything from conservationist, environmentalist, preservationist, to eco-terrorist! ‹ as the subject of its new, seven-part series, Whale Wars, which premiers November 7, 2008. Just as heroic is the Whale Wars’ daring camera crew who filmed the dramatics at sea. As its name suggests, Whale Wars focuses on the Sea Shepherd’s epic journey to stop illegal Japanese whaling. Using nothing less than Extreme sport-like tactics to navigate the treacherous deep-sea conditions, they thwart the whalers from carrying out their crime.

During a break in his busy schedule, Awareness Magazine seized an exceptional moment to speak with Captain Watson. In the conversation below, he shares candidly about his life’s mission, the work of Sea Shepherd, and the excitement building around the upcoming Animal Planet docudrama.

Mischa: Please tell us how your mission began.

Paul: It began a long time ago actually. I grew up in a fishing village in rural Eastern Canada. When I was 10 years old, I befriended a small beaver. I spent that whole summer watching the beavers. The next summer I returned to find them all gone. I asked around and found out that trappers had taken them all during the previous winter. I became quite angry and that following winter I walked the trap lines, releasing animals and destroying traps. So, it really all started at age 10.

Mischa: Is it true that Greenpeace and Sea Shepherd still campaign for some of the same causes?

Paul: In different ways . . . Greenpeace protests, and we intervene in illegal activities exclusively. We also deal with marine issues exclusively.

Mischa: Let’s talk about your interventions in illegal Japanese whaling. Purportedly, the Japanese hunt whale in the name of research. What kind of research could they possibly be conducting on this magnificent, endangered animal?

Paul: There’s no research at all. They haven’t published a single peer-reviewed scientific paper in the 20 years they’ve been doing this so-called “scientific research.” In 1986 the International Whaling Commission passed a moratorium on all commercial whaling, and so Japan decided to use this so-called “scientific research” as the loophole to continue whaling. They’re targeting endangered whales, even in whale sanctuaries, in violation of the global moratorium.

They are condemned every year by the International Whaling Commission (IWC), but the problem is the IWC has no powers of enforcement. While all the laws and regulations look really good on paper, they have no means to enforce them. Sea Shepherd is set up to actually enforce the IWC regulations. With our ships we directly intervene in the whaling activities and shut them down.

Mischa: If not for research, what is the purpose of Japanese whaling?

Paul: It all goes for food, sushi bars. Only 2% of the Japanese people actually eat whale, but that’s sort of a market in itself. Modern whaling started in Japan in 1946. The Japanese whaling fleet was established by General Douglas Macarthur as a way of providing cheap meat for the Japanese people.

So Japan now says it’s a tradition. Well, it’s hardly a Japanese tradition because it was established by the Americans! They are very stubborn in their persistence to it because there are few natural resources Japan has except that which it takes from the ocean. So they are holding onto this.

Mischa: Is your work completely funded by donations? Paul: Yes, 100%.

Paul: The problem with international laws is that they all have a 200-mile limit. Beyond that, there really are no laws. There are a lot of laws, regulations and treaties on paper, but there is no international enforcement body. So most of the Earth’s surface is really in a state of anarchy. There’s maritime law, but that’s a bit “iffy.”

What we operate under is the United Nations World Charter for Nature that was ratified by the UN Assembly in 1982. It states in the UN Charter that any nongovernmental organization (individual or nation state) is empowered to uphold international regulations and laws specifically in areas beyond national jurisdiction. So we use that as our mandate to intervene.

Mischa: You have quite a cast of international celebrity support, including the epitome of non-violence, the Dalai Lama himself. You adhere to the United Nations Charter for Nature. I am stressing the aspect of non-violence here. Why then do certain sources refer to Sea Shepherd’s work as “eco-terrorism?”

Paul: People who are calling us “eco-terrorists” are the very ones we are opposing. Oftentimes if you hold up a picket sign, you are called violent.

Mischa: Basically, the people who call your organization “violent,” are those in favor of whaling, for example?

For instance, in 1986 we sank half the Icelandic whaling fleet in Reykjavík harbor and destroyed the whale processing plant. That was 10 million dollars worth of damage. They called us terrorists. When I turned myself at Reykjavík, they refused to arrest me. They just told me to leave the country. They knew if they put me on trial, they would be putting themselves on trial for illegal whaling.

Mischa:  With respect to your “Eco-Crime Watch System,” how often do you get information that leads to arrests?

Paul: We frequently get quite a bit of information and assistance. We’re working down in the Galapagos and Ecuador opposing shark finning. We have a whole system of informants there. Last year our informants gave us information that resulted in our seizing 45,000 shark fins and 100,000 sea cucumbers and busting the ringleaders of these operations in Ecuador. So it was a major coup, which mostly came from providing awards to informants.

Mischa: The perpetrators were actually arrested?

Paul: Oh yeah! We were ‹ and still are ‹ working in partnership with the Ecuadorian National Environmental Police and the Galapagos National Park Rangers.

Mischa: Do the rewards to your informants come out of Sea Shepherd’s donation funds?

Paul: Yes. We have just partnered with Lush Cosmetics, and now they are providing us with funding for our shark campaign. They have come up with a new product called “Shark Fin Soap”* and the proceeds go to Sea Shepherd’s campaign. [Proceeds from the sale of Lush Cosmetics’ vegan soap facetiously named “Shark Fin”* is donated to SSCS. http://www.lush.co.uk/Products/Shark_fin_Soap_3200.aspx

Mischa: Congratulations on obtaining Lush’s support and contributions! For decades now, you’ve tirelessly put your life at risk in defense of whales and all sea creatures, and for the preservation of eco-systems. Do you ever get discouraged?

Paul: No. We get a lot of hands-on results from our work. When we go out to sea, we save lives. That gives a lot of satisfaction to the crew who are involved because they see direct results for their efforts.

Mischa: Clearly, you are not doing it for the money!

Paul: No! The crews are volunteers. We’ve had over 4,000 people volunteer to crew on the ships over the years. Some of them go on to set up their own organizations.

For instance, you know PETA (People for the Ethical Treatment of Animals)? That was founded by one of my crew-members, Alex Pacheco. He was only 19 when he came on board. I look on our crew as a way of empowering the volunteers, helping them to understand that they as individuals can make a difference. People so often feel helpless and overwhelmed. Individuals make the difference, and always have./p>

DDon’t depend on any governments or big organizations or large corporations to solve problems. They never have, never will. Anthropologist Margaret Mead said all social change comes from the effort of passionate individuals.

Mischa: How did Animal Planet become interested in your organization? Paul: I think it was just natural really. And it’s exciting! For instance, Discovery has [the show] “Deadliest Catch.” When you think about it, there’s a lot of rough water and people are going out catching crabs. We have a lot of rough water, bad weather, and in addition, we have icebergs and whales and people risking their lives to protect them.

Mischa: I saw a preview of Whale Wars in which you took a bullet to your chest!

Paul: Well, I had a bulletproof vest on. It still left a pretty bad bruise though. It’s interesting because at first the Japanese said they had fired four shots. Then when they found out that one hit me, they denied it. But Animal Planet did catch the four shots on audio when the film was being made.

In fact, when they threw the concussion grenade, one of the cameramen for Animal Planet followed the grenade right in and it exploded right in front of him. It was a terrific [film] shot, but it knocked him flat on his back!

Mischa: I’m just thinking, if there’s anyone out there with lingering doubts about your non-violent approach, they’ll get to see where the violence is actually coming from.

Paul: Yes! [laughing] A concussion grenade normally knocks a person unconscious. There was nothing to contain the concussion when it landed. It was a little scary.

Mischa: I do commend your bravery and that of the crew, and your very noble work. For anyone not out there in TV land when Whale Wars airs, what other information should we know about you and SSCS?

Paul: That we are making a difference. Whale Wars gives people the opportunity to come down to one of the most remote and hostile regions on the planet and to participate in saving the lives of the most magnificent creatures on the planet.

Mischa: How long do envision yourself doing this work? Do you ever get tired?

Paul: All my life. There is no retirement in this line of work. I wish that I could retire, really. We say that we’re in business to put ourselves out of business. Unfortunately, that still seems so far away from happening.

Mischa: What is the best way for people to support the cause?

Paul: If your readers visit our website, www.seashepherd.org, there’s a lot of information there. Our organization has been around a long time, but has grown very slowly. We’ve never done direct mail or door-to-door solicitation. People come to us. We feel that represents a more loyal following.

We don’t want to waste people’s money on raising money. Many of the big organizations spend 70-80% of their money on raising more money. We’ve said right from the beginning that we wouldn’t do that, which is one of the reasons we’ve grown slowly. At the same time, we’ve had consistent growing support over the years./p>

Our crews are all volunteers. You couldn’t pay people to do what our crew does for nothing!

Indeed, what price can be put on saving lives? The direct action work of SSCS is vocational; born of compassion, commitment and a clear vision for our future generations. See compassion in action when you tune in to Animal Planet’s Whale Wars on November 7th for courageous and harrowing adventures on the high seas!