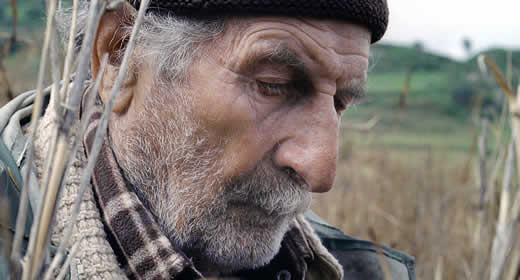 Literally translated, “The Four Times” (stages may be more accurate in English) is Michelangelo Frammartino’s homage to the Calabria of his heritage and the homeland of 6th century BC Greek philosopher, Pythagoras.

Frammartino poetically interprets Pythagoras’s four-fold transmigration theory, which in effect presupposes that four lives live within each human, one fitting inside another.  Human being contain the mineral, plant and animal kingdoms, as well as “the gifts of will and reason.”  Thoughtful and interesting film work exposes these four stages as they play out in a medieval, walled village roosted amid the Pollino mountains of Calabria, Italy.

Weaving between the macro and the micro, Le Quattro Volte observes the cycles of life through mirror shards and microscopic and telescopic lenses.  A close-up of an ant crawling on lichen alternates with spanning aerial shots of the rugged splendor of the mountainous region, thusly attempting to reveal the endless nature of an energy that never dies but only changes form.

The film opens with an elderly goat herder (Giuseppe Fuda) tending his flock on the hillside.  The camera cuts to his labor-weathered hands that clutch a shepherd’s staff.  Chaotic rattling of his pneumonia-like hack disrupts the tranquil sounds of nature, helping to set the scene that is human existence.

As is his routine once the workday is done, the old herder goes to the village church where he makes an exchange with the woman who cleans there.  A bottle of goat’s milk is traded for a packet of soot swept up from the church floor.  As the man readies himself for bed later that night, he concocts the soot with water, which he drinks down presumably as medicine.  When this human chapter eventually comes to an end, the screen darkens and reopens with the birth of a goat.  As so it continues with the little kid goat, then the life of a fir tree, and ultimately winding into an archaic and alchemical conversion of wood into charcoal.

The use of locals rather than professional actors gives the film a documentary feel, as does the fact that for the most part humans are not the main subject.  The main subject seems to be energy or spirit.  The camera work is unhurried and has a dreamy, meditative quality.  Except for some muffled background conversation, there is no dialogue.  The thrust of the sound is environmental, which emphasizes organic movements and timeless progressions.  This almost-wordless aspect of the film is beautiful, yet unsettling and evocative of desolation, too.

In comparison to the usual conception of film, this one’s process seems opposite.  While there is certain structure to the film, it seems not to follow a rigid script.  Utilizing the camera, background becomes foreground, and vice-versa.  With a tempo that incorporates nuances often overlooked in ordinary life, the impact is simultaneously subtle and dramatic.

Frammartino’s choice for Calabria as his setting to elaborate the cyclical patterns of the cosmos is spot on.  The film captures both the essence of the ordinary and the mystical of which this ancient place is steeped, therefore making it a perfect location to conduct an examination of life.  Though the four-fold transmigration theory is not necessarily self-evident, the point Frammartino affirms (that all beings are of spirit and that that spirit is transfigurative and interconnected to all other beings) is clear.  That said, the ambiguous elements leave room for each viewer’s personal contemplation and interpretation. 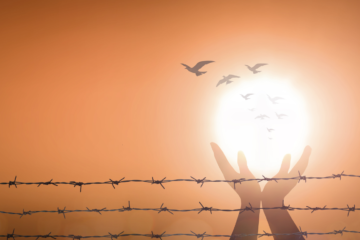 “The human rights cases in these pages are among the most unlikely ones slated for victory.” Dismantled in a manner more dictatorial than democratic by the purportedly morally superior pulpit of the United States presidency, Read more…