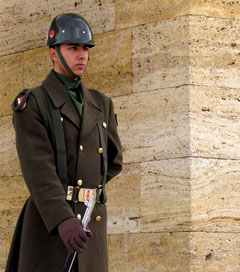 Reporters Without Borders brings international attention to the three month-plus imprisonment of Turkish investigative journalists Ahmet Sik, a reporter on human rights violations and alleged illegitimate Islamic networks in Turkey, and Nedim Sener of the newspaper Milliyet. The two, along with many other reporters, are jailed for their supposed membership in the Ergenekon organization – publicized as a shadowy, ultra-nationalist organization in Turkey with ties to militia and security forces. The charges are particularly ironic in that Sik and Sener have worked at length to expose that organization’s activities.

In recent years, journalists, academics, politicians and military personnel have regularly been detained under the pretext of Ergenekon investigations. Initially, the case, which commenced in 2007, was praised as a long-awaited assertion of civil power over military and a move toward more legitimate democratization. Detractors of the investigation, however, reproach it as a means to persecute anyone critical of the government. Moreover, it is widely believed that Sik and Sener are imprisoned for their research and writing on the Ergenekon case, for which more than 200 people are on trial.

Sik’s unpublished manuscript of an investigation into Turkish security forces, the Islamic “Gülen Movement” and the Ergenekon case was confiscated, destroyed and banned following his arrest. Anyone suspected of possessing a copy was ordered to turn in the manuscript or face prosecution for collaborating with Ergenekon.

The Turkish government has become increasingly intolerant of any critique of the government. Another case in point is the arrest of Ahmet Altan of the daily Taraf. Altan, Taraf’s “2010 Man of the Year,” published articles addressing the government’s decision to tear down an unfinished statue that would have symbolized reconciliation between Turkey and Armenia. Altan is charged with “offending the person of the prime minister.” In 2008, Altan published the article “Oh, My Brother,” dedicated to the victims of the Armenian Genocide, and was charged with “denigrating Turkishness” under Turkish Penal Code Article 301.

Though Turkey has made reforms over the past decade to allow for more freedom of the press, in actuality, a legislative straitjacket continues to stifle journalists. Reporting on certain topics – notably, judiciary cases or the Kurdish issue – is still routinely punishable in the courts. Journalists are arrested and tried for doing their job or expressing an opinion; their documents are seized and sources are tracked down. Despite Prime Minister Recep Tayyip Erdogan’s contention that his Justice and Development Party has advanced the nation toward democracy, the media crackdown and imprisonment of Sik and Sener demonstrate the contrary. Various local media agencies report more than 60 journalists (many of whom are Kurds) under recent arrest. This conflicts with Erdogan’s assurances that only 27 are jailed and none for journalistic work. According to Reporters Without Borders, at least five are imprisoned for their professional activities.

Turkey’s Anti-Terror Law – which has come to include journalists and even Kurdish children as terrorists – is in need of immediate revision. Protests among Turkish civil society in recent months demand a fair governmental response to the journalists’ imprisonment and lack of freedom in media. The latest arrests of journalists have drawn US and EU criticism concerning Turkey’s stunted freedom of the press and again brought hundreds of protesters to the streets of Istanbul on 18 June.

Reporters Without Borders is calling on the Turkish government to give urgent attention to the imprisoned journalists (names compiled by the Freedom for Journalists platform in Turkey and the Organization for Security and Cooperation in Europe) and to immediately and unconditionally release all those journalists imprisoned for performing their jobs.

Reporters Without Borders’ “world press freedom index,” ranks Turkey in 138th place out of 178 countries. Regarding Turkey, the organization has stated that “[p]rogress towards democracy over the past decade has been impressive, but is incomplete and fragile. The latest attacks on journalists show that a return to the past is possible at any moment.”