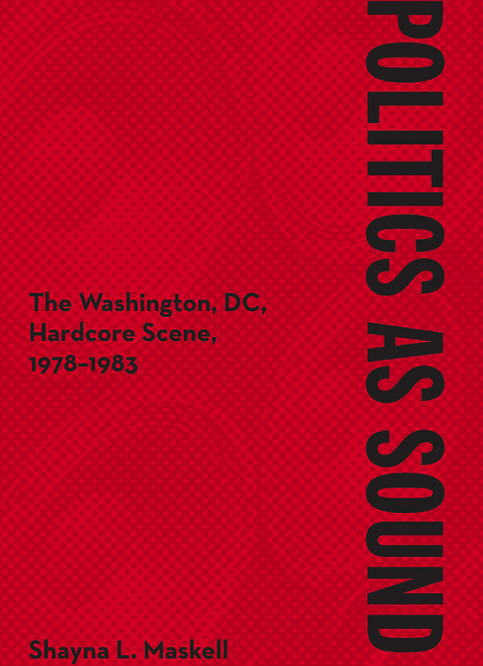 This was first published by Project Censored

Premised on the idea that the development, experience, and messaging of music are indivisible from geography and chronology, Shayna L. Maskell, professor in the College of Humanities and Social Sciences at George Mason University, interprets a lesser known version of Washington, DC history via “DC hardcore;” harDCore, as it was known in the vernacular. Politics As Sound examines this music as “a performance of self…complicated and contradictory,” as well as a presentation of the politics of its circumstances (3).

Through hardcore, Politics As Sound deep-dives into the state of the State circa Carter-Reagan, a time when humanity, as memorably broadcast by President Jimmy Carter, suffered from “a crisis of confidence,” a period rife with discontents at home and abroad. Trust in government, institutions, experts, and the media was at an all-time low (24).

Sound familiar? History does have a way of repeating. As such, investigations into and analyses of lesser explored corners of the past can offer more nuanced perspectives on the present and foreseeable future. Exploring the trajectory of DC hardcore, Politics As Sound deconstructs the capital city’s identity crises, and its underground alter ego.

Negotiating its way through the DC music scene with a growing sense of self, harDCore discovered, albeit unwittingly, that sound can be political. Outwardly critical of imperialistic pursuits, mass consumerism, and “the man,” DC hardcore prided itself on a low-budget DIY, urban aesthetic that would come to form its own musical niche, affiliating the bands and their music with civil rights, social justice, and self-empowerment.

Often characterized as punk rock transfigured, this homegrown hardcore is examined as an identity, as social and political commentary, and an unlikely waymaker for succeeding artists and activists in the Capital region and beyond. Music aficionados, history buffs, and social scientists alike will appreciate Maskell’s account of the lives of musicians, and rise, fall, and rebirth of some of DC’s most iconic hardcore bands, including Bad Brains, Minor Threat, Teen Idles, State of Alert, and Government Issue. More than a who’s who of hardcore, however, Politics As Sound spotlights the import, influence, and degrees of local (in)hospitality on the content of the music and the character of the musicians.

Maskell shows how art is reflective of and responsive to the society and epoch in which it emerges. She discusses the intersection of place and production of music as constructs of identity and branding, and vice-versa (16). Indeed, throughout history and around the world, music timestamps events and place. As a musical genre, for example, flamenco—to greatly oversimplify—reflects the culture and social status of the Romani in late 18th century Andalusia. It’s difficult to think of flamenco but not Spain. Likewise, rembetika, the urban street music that sprang up in the 1960s among Greece’s poorer classes, is impossible to separate from its homeland.

Musical genres have a way of encapsulating attitudes and worldviews, frequently finding their way into common parlance. “Woodstock,” for instance, conjures up the 1969 music festival. Ditto for San Francisco’s “Summer of Love.” Firmly established bastions of sexual and gender freedom, anti-war folk music, topical songs and poetry that pled for peace, love, and justice set the tone of the era as well as the fashions of its counter-culture. It didn’t take long for flowing hair and dresses, psychedelia, flowers, and dancing bears to trend. Similarly, grunge—punk-metal’s afterbirth—a sound synonymous with the Pacific Northwest, inadvertently inspired the waif fad, gracing runways from New York to Paris to Milano. Ironically, high fashion co-opted the hippy handmade and grunge thrift aesthetics that were meant to reject conspicuous consumerism. Commercial rip-offs though they were, perhaps not entirely. Plausibly, the music’s fundamental messaging resonated beyond its originating margins.

Born in the nation’s capital and seat of superpowerdom, DC hardcore kids narrated their city’s culture and politics in a way that only natives can. Bands and their fans bemoaned a city overtly capitalized and stratified by class, race, and freeway. The now famous Capital Beltway system acted as an identifier not unlike the “bridges and tunnels” of the Tri-State region, or the “wrong side of the tracks” trope. Accordingly, the rough-edged vulgarity of hardcore was easily associated with DC’s lower-class frustration and insolence (79).

Musical styles, Maskell asserts, are “culturally constructed…and continuously in flux” (75). Thus, what began as a musical middle finger to the hypocrisies and injustices of the socioeconomic-political structures, by Reagan’s second term of office, devolved into disillusionment and despair, with concerts often marred by violence. As the DC scene unraveled, it also reconfigured, shifting from its signature “fuck you” stance to one revelatory of emotional processing. Defiant, destructive refrains began to mature. Though still topical, lyrics became more self-reflective, decanting personal loss and grief, as well as socially reactive to the culture of Reaganomics, to an increasingly conservative Supreme Court and laws of the land, and broadening class divides. Growing pains notwithstanding, left-leaning DC hardcore resistance found causes to be for, such as sobriety, positive thinking, vegetarianism, no nukes, animal rights, voting rights, and climate justice.

In another time and place, Oakland, California-based visual artist-activist, Favianna Rodriguez, talks about the power of local culture to affect wider change. Local culture has its ear to the ground. Embodied through music, art, performance, film, or poetry, culture is quick to reflect, react, respond to, and report on what’s happening. Culture moves faster than politics, and is therefore able to leverage the power of the people to influence change. “[T]he personal dictates the political rather than the reverse,” writes Maskell (89).

The dissolution of some of DC hardcore’s original bands was most notably marked by Bad Brain’s relocation to New York, and the departure of Henry Garfield (better known as Henry Rollins) to Los Angeles. After a five-year run as Black Flag’s front man, Rollins purportedly continues to live out his hardcore ethos. Up to date, the Henry Rollins show airs weekly from Los Angeles NPR member station KCRW with punk-hardcore-heavy curated setlists “from all over and all time.” Unsurprisingly, DC hardcore bands often make the cut. Meticulously catalogued and available online, Rollins’s radio show offers up musical commentary on the issues of the day.

Throughout history, social struggles and the arts have collaborated to stake their claim in the world. It follows then that subcultural and counter-cultural movements have their place in the ‘rights and justice’ schemata too. If culture and its requisite artforms can shift the status quo, subcultures—though typically “relegated to the realm of youth,” and thereby afforded less sociopolitical agency—might still pose a threat to hegemonic norms, even if only subliminally. While subcultures are often “neutered by commercialization and commodification or delegitimized by [the corporate] media, politicians, or adults in general,” from beatnik to hippy, from surfer to skater, subcultures are influencers nonetheless. “Social movements,” explains Maskell, “are understood as the purview of adults.” Formally organized and legitimized by goals and measures of power, social movements hold sway on political outcomes. On this point, much of chapter six examines theories that argue for “understanding subcultural practices as part of social movements” (169).

Whether despite or because of adversity, DC hardcore not only managed to make its imprint in the music world, confirming longevity and recognizability for musicians like Ian MacKaye and Henry Rollins, and founding Dischord, a successful and stridently independent label, it set some unexpected activists into motion too. Progressive harDCore ideals coalesced into Positive Force DC. Inaugurated in the mid-80s, the organization continues its activism for social change. Altogether, the hardcore scene chipped away at the city’s square-edged, neocon governmentality, and put DC on the map in a hip, new way.

DC hardcore lent inspiration to now famous musicians and bands like Dave Grohl of Nirvana and the Foo Fighters, and the Red Hot Chili Peppers, and paved the way for future statement-making heavy-hitters like Rage Against the Machine and System of a Down. DC hardcore has now taken its seat at several tables—commemorated by academic institutions such as the University of Maryland and George Washington University; by government institutions including the Martin Luther King, Jr. Library, the Smithsonian, and Corcoran Gallery of Art exhibitions; and featured in documentaries, including Punk the Capital (2019) and Salad Days (2014), in books, such as Scott Crawford’s Spoke (2017), on television, and other media. The volumes of archival data, interviews, and narratives, researched and recorded with academic acumen, make Politics As Sound a unique addition to the American rock music canon. In retrospect, says Maskell, DC hardcore achieved both institutional and pop culture acknowledgement, showing that a group of disaffected kids with a few instruments and a forthright songbook are capable of communicating with power and agency in the sociopolitical domain (234-235).

You can purchase Politics As Sound here.

Informed by the Universal Declaration of Human Rights, journalist oath of ethics, and Levantine roots, journalist, educator, and Censored Press board member, Mischa Geracoulis writes on origins and identity, diaspora and displacement, human rights and the multifaceted human condition. She Tweets @MGeracoulis.