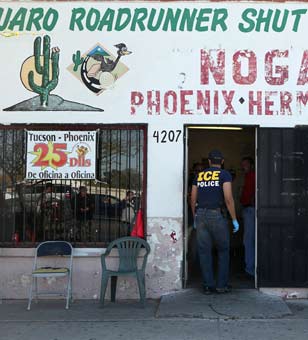 Immigration authorities raiding a shuttle business suspected of being used for human trafficking across the border in Tucson, Arizona, on April 15, 2010. (Photo: Monica Almeida / The New York Times)

Human trafficking is the commercialization of that which no one has the right to sell – human lives. These lives – approximately 30 million women, men, girls and boys worldwide – are bought and sold for labor, commercial sexual exploitation and war. According to the US Department of Health and Human Services, trafficking is the fastest-growing criminal operation – tied with arms smuggling and second only to drug trafficking. It’s highly profitable; estimates figure that trafficking enterprises generate upward of 30 billion US dollars per year.

Though trafficking often involves smuggling and border crossings, that’s not always the case. Nor is it the case that trafficked, enslaved humans are found only among the predictable provinces of garment industry sweatshops, pornography and agriculture. No longer a problem that’s “out there,” trafficking happens internally, in all 50 states, right in our very own neighborhoods.

Trafficking crimes in commonplace businesses like nail and hair salons, massage spas, commercial janitorial service companies, domestic and hotel housekeeping, restaurants, bars and even in suburban residential brothels, are categorized under US federal law as sex trafficking or labor trafficking. California counties like Sacramento, Los Angeles, Orange and San Diego are a hotbed for both manifestations of this criminal activity.

The Polaris Project publishes a list of potential red flags, ways to recognize trafficking and slavery within one’s own community because, Polaris polaris explains, there is no typical profile of a trafficking victim in the US. The victim may be a child or adult, formally educated or not, a US citizen or an undocumented immigrant. The common denominator among victims that renders her or him vulnerable to trafficking is, nevertheless, the pre-existence of instability and a desire for a better life.

Increasingly, commodities produced by slave labor such as cotton, bananas, rice, coffee, tea, chocolate, bricks, fashion accessories and electronics reign in the US market. The Better World Shopper, a research organization that ranks corporations based on a corporation’s social and environmental practices, publishes information on more than 1,000 corporations. Walmart, Chevron, GE, Citibank and Nestle, turn up at the top of its worst offenders list.

Based on the economic principles of supply and demand, human trafficking thrives. There is a direct correlation between human trafficking and unchecked consumerism, particularly as the desire for cheap goods and services, instant gratification and commercial sex drive the demand side. Contributing to this exploitative economic model is the reward to corporations for increasing profits. The essence of this concept came to light in the recent Apple Foxconn scandal where workers (while not trafficked) endure extreme conditions. Similarly, UC Santa Barbara’s Kum-Kum Bhavnani’s latest documentary “Nothing Like Chocolate” illuminates the prevalence of trafficked slave labor in the chocolate industry and how corporate giants dominate the market by selling cheap, industrialized chocolate dependent on slave labor. Chocolate production exemplifies the inner workings of global trafficking and slavery, which is evident at almost any junction along the labor supply chain.

One hundred seventy-three nations (under the 2000 UN Palermo Protocols) have laws against human trafficking. Around the world, selling people is illegal. In response to the 2000 UN Palermo Protocols, other laws have since passed or been reauthorized to require further labor and supply chain transparency. In an attempt to ensure that all segments of the labor and supply chain are free of trafficking, corporations grossing more than one million US dollars per year are supposed to operate under mandates that enforce monitoring, transparency, traceability and certification and ratings programs.

It’s assumed that most corporations would prefer to work within the parameters of international law and with international suppliers that uphold ethical practices, respecting human and worker rights. Many businesses – although well aware of the slavery and trafficking that takes place within their industry and the illegality of such practices – enjoy such a level of profit that qualms are oftentimes outweighed and allayed, mainly because those who employ trafficking and slavery are seldom prosecuted. So, while on paper these mandates appear useful, certification and law enforcement depend upon having trustworthy people working on the ground. This can present a challenge, implying that enacting these laws is also a challenge.

Globalization at its very best-case scenario is meant to provide economically challenged nations the opportunity to improve domestic living standards by exporting to wealthier nations. However, human trafficking highlights the worst-case expression of globalization. Globalization lacks a conscience and it is this very lack that contributes to the persistence of slavery and trafficking and an even deeper entrenchment of poverty among local populations.

As long as consumers (of the developed world) are getting what they want when they want it, there seems to be no pressing reason to question the prevailing system. But as reports of human trafficking land closer to home and as celebrities like Julia Ormond, Mira Sorvino and Emma Thompson bring the issue into the spotlight, it’s not only reasonable to question global economic practices, but it’s fashionable. The Invisible Children’s Kony 2012[www.kony2012.com] campaign demonstrates utilizing the power of celebrity-created culture (one hopes) for the betterment of humankind. Celebrity involvement raises the profile of the issue. In our highly commercialized world, we’re used to celebrity endorsement and sponsorship and involvement in various charities and issues. And so it is with some degree of irony that the celebrity trafficking and slavery bandwagon, is, in essence, promoting anti-consumerism – or at least a more conscious brand of it – in a world where the promotion of celebrity excess is not just the norm, but is, well, celebrated.

That said, anti-slavery and anti-trafficking movements are geared to necessarily awaken consumers to the fact that, by virtue of consuming, they’re unwittingly complicit to the free market’s supply-and-demand structure that sustains the exploitation of human beings. Subscribing to the global economy needn’t also be a subscription to exploitation. To awaken to the reality of the not-so-free market is also to realize that every consumer has the responsibility and capacity to think through and wisely choose, ensuring that everyday purchases are not having a detrimental impact on others.