The Semantics of Gaza, War and Truth 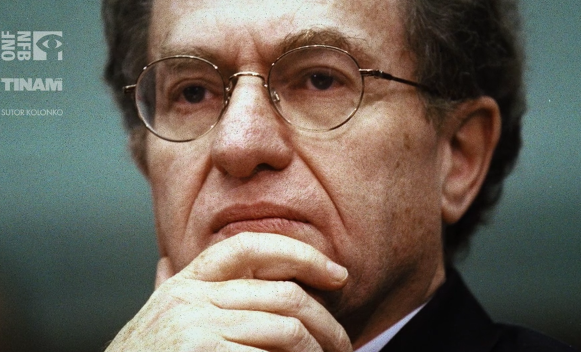 This Is Not A Movie: Robert Fisk and the Politics of Truth (2019), the work of Chinese-Canadian filmmaker, Yung Chang, is, overarchingly, a study of journalism’s position in today’s corporatized media, amid weaponized language and fake news, and its role in reporting on the Middle East. Known for his cinematic explorations of the human condition and conflict through complicated characters, Chang features veteran foreign correspondent Robert Fisk (1946–2020) to examine the functionality of press freedom, independent ethical storytelling, and critical media literacy. Since the spring 2021 blitz on Gaza — the most intense since Israel’s 2014 onslaught — Chang’s This Is Not a Movie is seeing renewed interest, if not for Fisk the person, for his analysis of and position on Gaza.

In spite of Chang’s personal commitment to bring to the screen methodology untethered from the conventional white, patriarchal, colonial stance, he chose to spotlight the work of white, male, British Robert Fisk. Chang’s director’s statement describes how following Fisk through the Middle East served the film’s objectives to challenge viewers’ beliefs about journalism and media, and for surveying semantics and the subjectivity of truth. Fisk’s willingness to confront cultural exceptionalism, power structures, and the corporate media that uphold those structures brings to light the deliberate asymmetry of the Arab-Israeli narrative. Chang’s inclusion of archival as well as recent footage of Fisk reporting in the Palestinian territories, Lebanon, and Syria, reveals just how protracted is the one-sidedness.

Says Fisk in the film, by changing words and downgrading language when reporting on Gaza — a war of attrition, he contended, that remains entrenched in colonialism, land theft, and human rights violations — the situation is effectively transformed into something that bears no resemblance to reality. In his decades writing for The Independent, Fisk assured readers that Israeli attacks on Gaza are about land, not Israel’s right to self-defense.  The corporate media’s rendition is deliberately de-semanticized, explains Fisk in this clip from the film.

Public intellectual and cultural critic, Henry Giroux, has long held discourse on the use and misuse of language in the corporate media, the proliferation of terror-filled headlines and images in service to agendas at work to change history and collapse public memory.  That media is part of a political economy in which certain stories carry capital is nothing new.

After a 2012 trip to Gaza, prominent linguists Noam Chomsky, Hagit Borer, and others from France, Canada, the U.S., and U.K., issued “Nous accusons,” an open letter expressing outrage at corporate media’s distorted portrayal of the realities there. The letter was a call to journalists working for corporate media outlets to heed their journalistic oath of ethics, as well as to citizens, urging them to become informed by independent journalists, and to voice their conscience by whatever means available.

“News items overwhelmingly focus on the rockets that have been fired from Gaza, none of which have caused human casualties,” the letter writers stated at the time. “What is not in focus are the shellings and bombardments on Gaza, which have resulted in numerous severe and fatal casualties. It doesn’t take an expert in media science to understand that what we are facing is at best shoddy and skewed reporting, and at worst willfully dishonest manipulation of the readership.”

Palestinian American professor of sociology and author of To Resist is To Exist (2019), Susan Rahman, purposed her book to ﻿show that “the whole security myth that Israel is promoting is absolutely false.” What’s called a “conflict” between Israel and Palestine, implies an evenly matched dispute, and writes Rahman, totally omits historical context and that the occupation of Palestine has always been punitive and debasing. Recounting a well-worn yet still useful quote from American economist, environmentalist, activist Winona LaDuke, speaks to the willful dishonesty in corporate reporting.  She’s alleged that the U.S. can’t honestly talk about Gaza because the U.S. can’t honestly talk about Israel because the U.S. is Israel. Pre-packaged lines like, “atrocities in Gaza are Hamas’s fault,” and “Israel has the right to self-defense,” keep conversations locked in status quo.

Says Rahman, moving forward, stalemated ﻿discussions must include the real effects of occupation of the Palestinian people, of life in an open-air prison, and in apartheid Israel.  Only when discourse is situated in reality and conducted with authenticity, she asserts, can there be any hope for movement towards peace, justice, or equity.  Otherwise, writes Barry Lopez in Horizon (2019), “we risk ending up in a wasteland of uninformed dogmatists, the same shortsighted, narrow-minded belligerents who rise up in every era of human history.”  While taking care, he cautions, not to position oneself on moral high ground, humanity has an ethical responsibility to object to wrongdoing. To this point, Fisk broke from the notion that a reporter must be neutral and unbiased [italics mine]. He claimed that neutrality must be extended to those who suffer rather than to the perpetrators of suffering.

Contends Fisk in the film, “First someone tells the truth; then someone else denies it… I’m a journalist, and my job is to tell the truth,” he rationalized.  Telling grim truths may not curry favor in the economy of politics and corporate media, but according to Fisk, equates to a form of societal insurance.  His ultimate worry, he admits nevertheless, is that truth telling might not ever make any real difference.

In June 2021, speaking with Nora Barrows-Friedman of the Electronic Intifada, Canadian doctor, Tarek Loubani, who often works at al-Shifa hospital and trauma center in Gaza City, says that since the spring 2021 attacks, some aspects of the conversation have shifted away from the Israeli narrative. Due, perhaps, to a more global view on the blatant destruction of Palestinian people and territories, popular Israeli storylines, its hasbara, are being called a bit more into question.

Says Loubani, “Up to this point, we’ve done reasonably well in talking about the human rights abuses and health crises in Gaza, and in promoting a truthful narrative about what’s really going on. However, what will happen in the future unless we’re very careful, is that we’ll run out of energy, stamina, attention, time, money; and the human rights abuse stories that are breaking now, will fade. The more familiar narratives of how everybody in Gaza deserves to die anyway, and everybody is a terrorist anyway, and the doctors who are going in to help are part of the problem anyway, will resurface. Let’s not make the same mistakes we’ve made before by turning our attention away just because the bombs have stopped.”

Returning to Lopez in Horizon, he’s articulated the tendency of governments to go light on corruption and murder, putting them down as necessary and legitimate tools of state; meanwhile generating despair and the sense that the “Palestinian question” is unsolvable. Reconstructing Gaza, maintains Dr. Loubani, is possible.  There is no lack of imagination, knowledge, or will, but rather it’s a matter of ending blockades on Gaza’s land, airspace, and territorial waters.

It’s also a matter of breaking from what Chomsky coined “the propaganda model,” from illegitimate historical revision and falsehoods that flood the news cycles.  While This Is Not A Movie projects no Hollywood ending, it is timely in its wariness of corporate reportage on Gaza.

The case for critical thinking, critical media literacy, independent journalism, and press freedom is made clear through the lens of Gaza. Coasting along to the most blaring, repetitious, mind-numbing headlines is easy. Harder, yet more incisive and exacting, is to probe prevailing narratives, demand accuracy and facts, and resist inculcation. More challenging still, perhaps, is to stretch beyond one’s own biases, beliefs, delusions of cultural superiority, or knee-jerk reactions that superficially confirm “truth.”

Palestinian American teacher and professor, Shamia Shoman, Ed.D., designs curricula for Teach Palestine, a resource organization for educators.  Teaching on subject matter rife with myriad narratives, she offers a critical thinking framework helpful for arriving at truths that may be closer to fact than spin. Her lessons enumerate what Chang illuminates through Fisk — methods for data discernment, critical thinking, and for cutting through the purposeful curation of rapid-fire sound bites that perpetuate us-against-them. Canadian journalist and social commentator Malcolm Gladwell has noted that we humans are never more alive as when our false beliefs, preconceived notions, and misperceptions are turned upside down.

This Is Not a Movie puts Gladwell’s premise to the test, examining the relevance of journalism within the changing field of media consumption, its role amongst the discordance of storytelling, and journalism’s raison d’être in Gaza and, more broadly, in the neoliberal era. It demands for fact-based historical inquiry, linguistic veracity, and ethical responsiveness to atrocity.