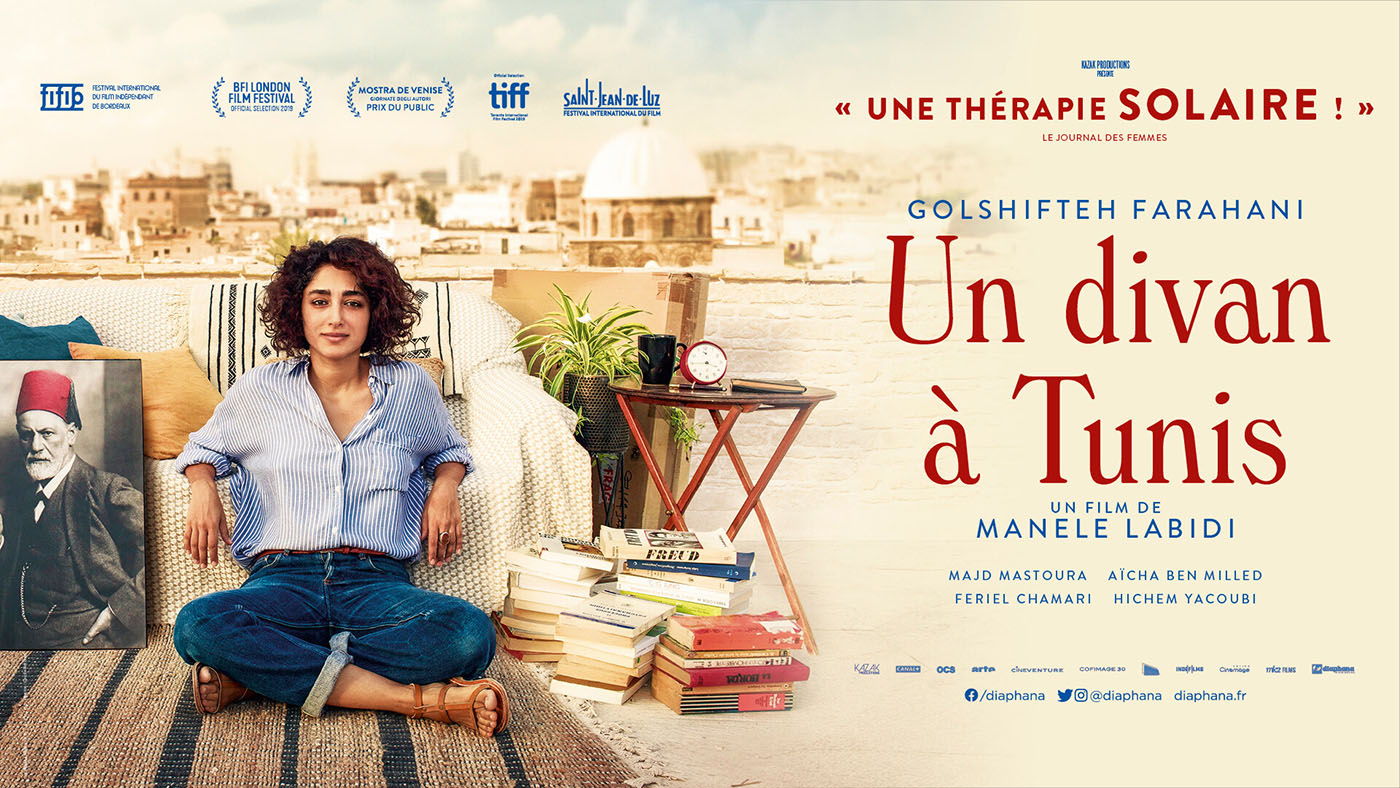 In Arab Blues, nearly ten years have passed since the self-immolation of Mohamed Bouazizi that fueled Tunisia’s Jasmine Revolution, and deposed the country’s longtime dictator, Ben Ali.  While life in the burgeoning democratic Tunisia is still fragile, Selma, a Tunisian-born French citizen, is returning to Tunis at long last. Suspicious of her solo return to Tunis, her uncle, aunt, and cousins wonder if Selma is on drugs, on the run, a Mossad agent, or maybe pregnant. And, why, they grill her, isn’t she married yet? Why does she “dress like a guy,” have piercings, tattoos, and unruly hair?

Scenes of the city depict crowds, confusion, graffitied buildings with revolutionary slogans and the rather ubiquitous Tunisie libre (“free Tunisia”). Selma’s family can’t fathom her trading Paris for Tunis, the very place that they wanted to leave. Looking every bit the Parisian intellectual, Golshifteh Farahani plays the self-possessed and serious Selma, who, much to her family’s disapproval, is intent on opening a psychoanalysis practice in Tunis. Against the family’s objections, she moves herself into their apartment complex, and sets up shop in the rooftop flat.

Selma insists that people in Tunis need to talk. “We have God…we don’t need this bullshit!” rants her uncle. In Paris, rationalizes Selma, there were two other psychoanalysts in her building, and another ten on the same block. Thus, Tunis is where she can be of more service. There are obstacles though, and among them is the need to secure a medical license and business permit for her new practice. Selma’s mostly ineffectual journey within the bureaucracy of the Ministry of Health is both frustrating and funny. When she asks a secretary there if her application is in order, the response is a heavenward glance, punctuated by “inshallah.”

Meanwhile, Selma goes to the hair salon to offer psychoanalysis to the women there. As she describes a journey to oneself, through an inner door that opens to happiness and peace, she’s met with sarcasm and blank stares. But when she adds that she can be flexible with payments, suddenly everyone wants her business card. Despite an initial show of disdain and distrust, patients line up to see her, and the practice takes off. Selma’s treatment room displays an array of diplomas, and a picture of Freud in a fez whom few recognize. She imposes strict rules of conduct and boundaries, and insists on usage of the formal vous, altogether earning her a reputation as a “post-colonial snob.” And yet the patients keep coming back.

After the police learn that Selma is practicing without a license, which almost lands her in jail if not for her uncle’s bail payment, her uncle orders her to go back to Paris! Daily calls from her father in Paris beg her to come home. Instead, Selma pleads her case anew to the secretary at the Ministry of Health, who, unmoved, flatly implores God’s protection unto Selma.

What the piece doesn’t mention I think is that half of Tunisians have considered leaving their country as per latest Arab Barometer survey from a few days ago. 41% would consider leaving as undocumented migrants.

The Tunisians in the film are fraught with post-revolutionary disillusionment, suffering from joblessness and socioeconomic struggles, loneliness, addictions, PTSD and paranoia, interpersonal discord, and internal angst. Their dramas and traumas are revealed by quirky, unexpected twists, such as when one male patient drops his pants. Misunderstanding Selma’s services, his defense is that he’d heard about “the French woman with a sofa.” To this point, the English film title, Arab Blues, is not nearly as fitting as the literal translation from French — “a sofa in Tunis.” One patient muses that the horizonal position offered by the sofa lends to the psyche’s desire to open up. And another male patient takes comfort in confessing his sexual dreams about dictators: Al-Assad, Mohammed VI, Saddam Hussein, and the name now on everyone’s lips, Putin. But, he says, “If I dream about that bastard Bush, I’ll throw myself out of a window!”

s much as the film’s characters moan about feeling stuck, scared, or wanting to leave Tunisia, Selma digs in and wants to stay. A cousin alludes to Selma’s father’s exile from Tunisia and her mother’s heartbreak, and when the stoic Selma eventually has an emotional meltdown, it’s plausible that Golshifteh Farahani’s onscreen sobs come from personal grief associated with her banishment from Iran. In 2012, Farahani appeared in a short, French film in which each actor involved makes a statement (corps et âmes) about their art by removing a piece of clothing of their choice. For her bit, Farahani discreetly flashes a breast. Since then, death threats from the Islamic Republic have rendered safe return to Iran impossible.

For Farahani, France is now home. From an article in The Guardian in 2012 by Fiachra Gibbons, the actress is quoted as saying, “For the first time in my life I appreciated being a woman. Paris is a city that liberates you as a woman from all your sins that you think you are guilty of, it washes away all of that, and you are free.” Farahani’s Selma conveys that sense of personal liberation; she is unapologetic and beholden to no one, for which other female characters in the film are envious.

Just as the next phase of Tunisia is unclear, so too is the film’s outcome. While Arab Blues doesn’t pretend to answer the questions that necessarily spring from a country still in transition, it doesn’t evade them either.  The multilayered, multicultural storyline is thoughtful and engaging, and the soundtrack that includes Italian music from the 1960s adds a perfect touch to the not-quite-Tunisian, not-quite-French, but decidedly Mediterranean vibe.